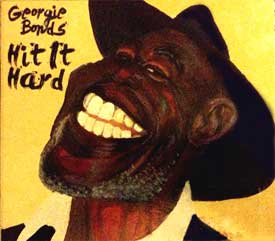 Hit it hard. This is what Georgie tells his band before they take the stage. Hit it hard. That’s how he worked as a blacksmith, that’s how he lives his life. Nothing is done in half measures. The 11 tracks on his third album, Hit It Hard, feature his good friends, music and songwriting partners guitarist Neil Taylor and harmonica man Buddy Cleveland and reflect many aspects of Georgie’s personal blues journey. The first track, “Pickin’ Your Bones,” is a tribute to Georgie’s mentor–the great Sonny Rhodes–who guided him as a fledgling blues singer. The final track, “Another Year,” laments the prospect of spending another year in jail. Georgie wrote this song, his first, as a young man during a two year stint in Federal prison. Between are songs of guilt and redemption, incarceration and freedom, toil and celebration, revenge and forgiveness, despair and wonder, loneliness and joy.

The average person would be content with fulfilling just one dream, but not Georgie Bonds. He has managed two. Having once been a prominent figure in Philadelphia’s storied Black Cowboys organization, shoeing horses and becoming a real-life blacksmith, hard work and a twist of fate has brought Georgie to the heart of the blues scene nationally and internationally. He’s been inducted into the Pennsylvania Blues Hall of Fame

Upon hearing of the many setbacks Georgie has endured, most people are amazed that not only is he still standing but that he continues to learn, grow, and thrive. You don’t have to talk to Georgie for long before he smiles and tells you just how blessed he is. In Georgie’s world, you count and rejoice in your blessings. All the rest is just noise. It’s a world that perhaps more people should inhabit. Georgie’s obvious talent attracts many fans and admirers. But it’s his personality and infectious positive attitude that turns them into a community of true friends and supporters. When times get tough, Georgie can always count on this community for its unwavering support. Yet another blessing.