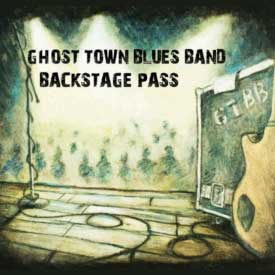 Backstage Pass is the fourth official release from Memphis, TN’s Ghost Town Blues Band. This 65-minute, high-energy, record led by front man Matt Isbell is an enormous blues and roots explosion that captures the best of what the Ghost Town Blues Band has become known for… Their live show.

Recording almost all of their festival, theater and club sets over the past two summers, this album is choke-full of redefined horns, organ, piano, harmonica, cigar box guitars, twin leads and Isbell’s gravel-soaked vocals. All of the live cuts on Backstage Pass ended up coming directly from the historic Lafayette’s Music Room stage in Memphis, TN on July 29, 2017 and was mixed by 8-time Grammy nominated producer and engineer Kevin Houston, who also plays sax with the band.

Backstage Pass opens with Ghost Town’s hill-country take on the Beatles classic “Come Together.” Matt Isbell, known for making over 400 cigar box guitars, showcases his 3-string on this tune which not only transforms into “Norwegian Wood” but then into the Zeppelin classic “Whole Lotta Love.” Track #2 reminds the listener that they didn’t show up just to rock out with the New Orleans inspired song by Isbell and lead guitarist, Taylor Orr called “Tip of My Hat.” This is a mid-tempo modernized rumba that talks about down-home cookin’, drinkin’ and lovin’ that is full of double entendres. GTBB’s third song is a new tune by Isbell, full of light and a throwback to the sounds of STAX and Motown called “Shine” that almost feels like a homage to the Temptations. Although it’s worth every penny, the next song, “Givin’ It All Away” features trombonist and hype-man Suavo Jones absolutely crushing it at the end of the jam inspired and groove-oriented song that has become a crowd favorite at GTBB shows across the continent. No blues show is complete without a song about a big-legged woman. “Big Shirley” is GTBB’s boogie-woogie tune featuring the band’s piano player and new addition Tim Stanek. This song was originally on Ghost Town’s highly acclaimed Hard Road To Hoe 2014 record and the live version veers into the Brit-classic Rock and Roll. On track #6, the band pays homage to Gregg Allman with a 16 minute, standing ovation version of “Whipping Post” that begins with bassist, Matthew Karner leading a reggae feel 4/4-time signature and melds into 11/8 and then 6/8. This performance alone is worth the admission featuring B-3, and Taylor Orr’s take on Duane’s furious yet, melodic guitar technique. Crowds across from coast to coast walk away from a GTBB show with “I Get High” stuck in their heads every weekend. Originally a George Porter Jr. song, GTBB has made it their own with added lyrics, a twin guitar section and even trombonist Suavo Jones stepping out front with an in-your-face rap that gets everyone on their feet dancing to the extremely funky and fast-paced 10-minute excursion from the blues festival norm. With the audience still buzzed from the audible joint that was just passed to them, Ghost Town performs their bourbon-based anthem “One More Whiskey” from the 2009 record entitled Dust the Dust. The crowd sing-a-long and Beale Street shuffle tells the story of Isbell’s whiskey-worn past reminding the audience that the band knows how to execute a Memphis style guitar and harmonica driven shuffle in E. Finally, Isbell dusts off his grandma’s silverware chest, which he made into a guitar on the next song with a sacred-steel guitar inspired Robert Randolph tune entitled “I Need More Love.” The boys all take turns at the helm, showing off their solo skills with a break in the middle to graciously gift a minute of Spencer Davis Group’s classic “Gimme Some Lovin’.”

From start to finish on this record, the group of humble, young musicians have proven again that they arguably have one of the best live shows on the festival circuit today.