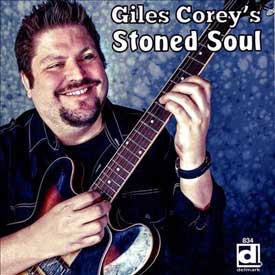 Stoned Soul, Giles Corey’s new release, features a unique blend of roots music, rich in history yet contemporary and forward-looking. Giles credits include being in the bands of Billy Branch & the Sons of Blues and Otis Rush. Giles also played and recorded with Syl Johnson, Mississippi Heat and Buddy Miles among others. The talented singer/guitarist was a founding member of the funk/blues/rock and roll powerhouse Lubriphonic. When Lubriphonic stopped touring in 2011, the seed was planted for Stoned Soul, Giles’ debut as leader.

Stoned Soul features the powerhouse lineup of longtime Buddy Guy keyboardist Marty Sammon, funky bassist Joewaun Scott and standout drummer Rick King. The album has eleven new originals and covers like “Don’t Let The Green Grass Fool You,” a 1971 hit for Wilson Pickett, Cedric Burnside’s “That Girl Is Bad,” and Gary Clark Jr.’s “Bight Lights.” Killer originals are the wild “Pork & Beans,” the moody “Home Is On My Mind,” the madola-driven rocker “Oh Mademoiselle,” which was recently featured in the compilation, Delmark – 60 Years of Blues.

The talented guitarist/singer/songwriter has been on the competitive Chicago blues scene for over 20 years wowing club audiences. You may know him from his longtime guitar stint with Delmark recording artists Mississippi Heat, where he first caught the attention on their Hattiesburg Blues Delmark recording from ’08. singing and outstanding original, “Say Something Good.” Giles has continued to say something good with his gutsy, fiery, aggressive and tasteful guitar playing with a who’s who on the scene and now with his Stoned Soul.