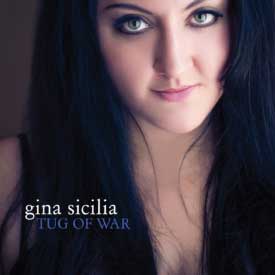 Dynamic blues singer-songwriter Gina Sicilia creates a deeply soulful new album – the emotionally honest, smartly arranged Tug of War. The album celebrates Gina Sicilia’s status as one of the reigning voices in modern blues and marks a potent evolution in her songwriting. The 11-song set is Sicilia’s seventh release since her emergence as a doyenne of the genre a decade ago. Today, Sicilia’s experience and the fully realized powers of her warm, flexible, emotionally nuanced singing resonate like never before. Produced by Grammy-winning producer Glenn Barratt and Grammy-nominated producer Dave Darling.

Tug of War’s title alludes to the complexities of life, which ring throughout this album’s original tracks, mostly written by Sicilia. And it speaks of her own experiences. “I’ve been through a lot in the past three years,” she relates. “I suffered through a painful and dramatic event in my life and needed to start over, so I moved to Nashville—where I didn’t know anybody, and went into a period of really challenging myself as a songwriter.”

Although Sicilia had planned a career in journalism, her natural gifts made music a stronger draw. While she was still in college, her 2007 debut, Allow Me to Confess, was released. After that, things happened fast. She was signed by one of the nation’s premier roots music booking agencies just one week later and began to tour the globe, play major festivals and rise up the blues charts. The album garnered her first Blues Music Award nomination, for Best Debut Artist.

Since then Sicilia has remained in the upper echelon of female blues vocalists, regularly releasing albums that earn accolades and ride the charts, and playing 150 dates each year. Asked about her passion for making music and her tireless pace, Sicilia replies: “Working—writing songs, touring, recording—motivates me. That keeps me inspired and focused. I’ve learned that hard work and experience are what it takes to grow and become a better artist. And I see myself as always evolving, reaching for a kind of perfection within the music I love to make. I’m not sure I’ll ever find it, but I’ll never stop searching.”