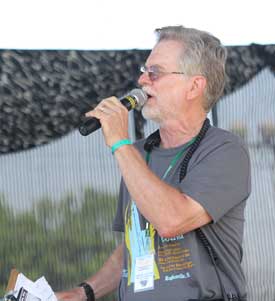 “Goodtime Charlie’s Got the Blues” has been on the air in central Pennsylvania since 1989. Charlie is on WZXR 99.3fm Williamsport, PA, commercial FM radio Sundays from 9am-11am, and then travels 40 miles to do his second live show on WQSU 88.9fm, at Susquehanna University in Selinsgrove, PA from 12 noon until 2pm. Charlie has devoted his Sundays to airing the blues non-stop for 26 years. Both shows are streamed so there are no geographical limitations for those who wish to listen.

It all started with the Blues Foundation

In ’88 Charles Lockard and Bonnie Tallman discovered the Blues Foundation in Memphis. While there, they discovered workshops by industry experts in radio, journalism, festival producers, and blues society organizers. It was here they met Bubba Jackson and Bernie Pearl, L.A. radio hosts, Bob Porter of WBGO, Roger Naber and more.

Wanting to establish greater blues awareness in rural PA, these workshops were the inspiration needed. Back in PA, Charlie soon started a weekly radio program, a blues festival was formed, followed by a blues society. Twenty five years later, all are still thriving and celebrating the blues in PA.

It took a year of knocking on doors begging radio establishments to allow the blues on the radio… 99.9% laughed at them and said “no way!” “Who listens to the blues?” “Doesn’t fit our format!” Thankfully they found a small start up radio station with a visionary owner who wanted to introduce “block programming.” Instead of a “radio format” of all the same thing, he wanted variety programming. This was long before the XM or Sirius radio concept was even thought about. This station owner welcomed them to play blues on his station. Of course they had to pay him to do so by buying two hours of radio time each week. But he allowed Charlie in and that planted the seed for everything else. Once the area “heard” the blues, they were hooked. The rest is history.