Grady Champion :: ONE OF A KIND 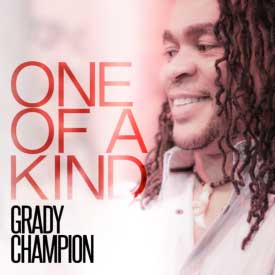 Singer, harp player, guitarist, songwriter, producer, entertainer, GRAMMY Award winner and Mississippi native, Grady Champion’s release, One Of A Kind, is his second album on his hometown label, Malaco Records and the 10th in his career. Champion wrote and co-wrote 11 of the 12 tracks. The Mississippi bluesman provides us with his own compositions and texts, brilliant harp and a lot of soul in his voice. Champion started with rap in his early career and with One of a Kind he combines elements of hip hop into his style of contemporary blues. He feels it’s important to stay true to his blues roots, and has become one of the few artists still getting airplay. One Of A Kind debuted at #1 in the Roots Music Report’s MS Album charts.

Grady Champion has been captivating audiences for more than two decades. He signed to Malaco Records, headquartered in Jackson, MS, in 2013; his first full-length release with the legendary blues label was released the following year. His album, Bootleg Whiskey, named for the George Jackson song, that is one of the album highlights, established Champion as a torch carrier for authentic Mississippi blues.

In 2011, Champion released his album Dreamin’, his song “Make That Monkey Jump” won a Blues Critic Award in the Best Down Home Blues Song category. and Tough Times Don’t Last (2013) on his own Grady Shady Music imprint, the former of which was nominated for two 2012 Blues Music Awards: Best Soul Blues Album and Song of the Year for “Thank You for Giving Me the Blues.”