Grainne Duffy :: WHERE I BELONG 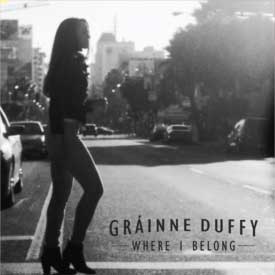 With a voice that is as passionate as it is raw and honest, accompanied by simple melodic and well phrased guitar lines, this is what you have in Grainne Duffy – an artist everyone will be talking about. A singer of real integrity as depicted by The Sunday Times.

Duffy’s new CD, Where I Belong, is a true testament to her talent as a vocalist, guitarist and songwriter. Grainne’s voice just gets fuller and rounder as her career progresses and her lyrics and music are outstanding on this album. Where I Belong is an honest, heartfelt album with more than a touch of Americana about it. It is more acoustic than her previous albums and the classy production really highlights Grainne’s voice, guitar playing and songwriting abilities.

The title song, “Where I Belong,” is a beautiful piece of storytelling about the feeling of belonging and relies on Duffy’s raw vocal talent over a beautiful acoustic instrumental. She describes that song as “a reminder not to take anything for granted, especially when it comes to loved ones.” “Open Arms,” is, as you may have guessed, a love song about being there for someone. Reading the rest of the tracks titles gives you a strong flavor what this album is all about: “My Love,” “Blame It On You,” “All Of My Life,” “Home,” “Don’t You Wanna Know,” “Shine,” “Canyon Road,” and “Don’t Want To Be Lonely.” There is also some wonderful slide guitar work by Paul Sherry and Doyle Bramhall II, which complements Grainne’s strong lyrics.

If you want powerful vocals, beautiful playing and wonderful storytelling, this CD is definitely for you.