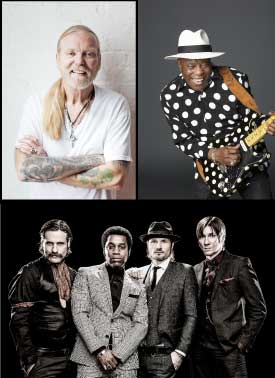 Celebrating the 17th year of Blues On The Beach in Southern California, Omega Events is proud to announce that Gregg Allman, Buddy Guy And The Doobie Brothers will headline the Doheny Blues Festival on May 17 & 18, 2014. Joining these three legendary artists will be Gov’t Mule, Keb’ Mo’, Vintage Trouble, James Cotton, Ruthie Foster, Charles Bradley And The Extraordinaires, John Nemeth and The Bo-Keys, James Intveld & Rosie Flores, The Mannish Boys, Roy Gaines and much more.

Recognized as one of the top blues music festivals in the nation, the Doheny Blues Festival features 24 sets of music on three alternating stages, plus tasty food, microbrew sampling, eclectic vendors and family fun. The festival is held at Doheny State Beach, a 62-acre California State Park, with sandy beaches, overnight camping and a spacious, waterfront grass park in South Orange County. Two main stages are placed at opposite ends of the grass field, with a third stage, The Backporch, in its own tree-lined bowl, offering intimate sets of music during the weekend.

Gregg Allman is one of the most acclaimed and beloved icons in rock and roll history. As founding member and vocalist for pioneering Southern rockers The Allman Brothers Band, Gregg Allman’s soulful voice is one of the defining sounds in American music history. Long considered an interpreter of blues music, Allman’s latest release is entitled Low Country Blues, his seventh solo recording, which earned a Grammy nomination for Best Blues Album. Recently, Gregg shocked the music world when he announced that 2014 will be the final year for The Allman Brothers Band.

Hailing from Northern California, The Doobie Brothers’ propulsive roots-based, harmony-laden, guitar-driven sound has become an American musical institution. The Doobies have rung up a glittering track record that would be the envy of any band. Beginning with their multi-million-selling sophomore collection Toulouse Street (1972), the Doobies sold more than 30 million albums, including the Best of the Doobies (1976) which sold more than 11 million copies – a rare “diamond record.” Their No. 1 singles include “Black Water,” “What a Fool Believes,” “Rockin’ Down the Highway,” “China Grove,” “Takin’ it to the Streets” and “Minute by Minute.”

Buddy Guy is one of the titans of Blues music, straddling traditional and modern forms, as well as musical generations. A Rock and Roll Hall of Fame inductee, Guy has been a major influence on rock titans like Jimi Hendrix, Eric Clapton, and Stevie Ray Vaughan, a pioneer of Chicago’s fabled West Side sound, and a living link to that city’s halcyon days of electric blues. He has received 6 Grammy Awards, 28 Blues Music Awards (the most any artist has received), the Billboard magazine Century Award for distinguished artistic achievement, and the Presidential National Medal of Arts. Rolling Stone Magazine ranked him in the top 25 of its “100 Greatest Guitarists of All Time.”

Tickets are available through dohenybluesfestival.com or the Omega Events Box Office by calling (949) 360-7800.  Doors open at 10:30 a.m. each morning, but arrive early because some of the strongest sets of music occur before noon!  The Official Non-Profit Partner of the festival is the Doheny State Beach Interpretive Association, which promotes the educational activities of the California State Park System at Doheny State Beach.