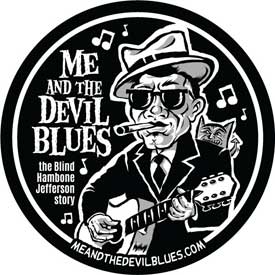 Grego Anderson has had a long career illustrating the Blues – founder of Mojohand.com, the world’s largest online Blues folk art gallery and apparel store, he has sold over 1000 paintings of Blues legends worldwide since 2001. Grego’s unique folk art illustration style has gotten him work on major magazine covers, concert posters, ad campaigns and most recently a series of beer labels with a large east coast Brewery. Now, he has turned his attention to a daily comic strip, “Me and the Devil Blues” – the day to day story of modern day blues man “Blind Hambone Jefferson” who sold his soul to the Devil in 2015 hoping to become famous… but things aren’t going quite as planned.

We’re pleased to feature our talented friend Grego’s brand new comic strip in our weekly e-Guide kicking off this week!

Me and the Devil site

Share. Facebook Twitter WhatsApp
Previous ArticleKelly Richey :: SHAKEDOWN SOUL
Next Article Tee Dee Young, a Legend in his own Time, on way to IBC in Memphis to Represent!