Guitar Pete’s grave… How do we honor our blues legends? 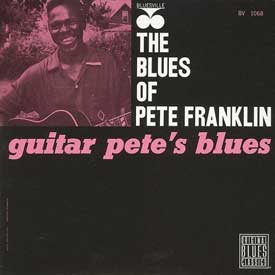 (INDIANAPOLIS, IN) – Last summer I spent a large amount of my free time traveling across the city visiting the grave sites of important local jazz and blues musicians. Sadly, for many of our city’s esteemed music greats a small stone grave marker is the only physical evidence of their existence in Indianapolis.

I spent one particular summer afternoon scouring Section 99 of Crown Hill cemetery in a search for the grave of the legendary Indianapolis blues player Guitar Pete Franklin. I must’ve spent a couple hours zig-zagging through the area reading and rereading every headstone multiple times before finally giving up.

A few weeks ago I renewed my search for Guitar Pete Franklin’s grave, but this time I decided to employ a more strategic method. So I called up the Crown Hill switchboard for guidance.
“Hi, I’m looking for information on where the grave of Edward Lamonte Franklin is located,” I said. “If it helps, he was born on January 16 of 1928 and he passed on July 31 of 1975. And, oh yeah, he might be listed under the name Guitar Pete. He recorded some really important records under that name.”

I waited eagerly for the operator’s response while I listened to her fingers hammering the information into a keyboard. “Section 99. Lot 4728,” she replied. It was the same information I’d found online last summer. I explained to her I’d previously spent several hours searching that area to no avail. After another audible flurry of keystrokes she returned with a definitive answer to my mystery:

It struck me as totally unacceptable that an artist like Franklin with such a legacy would be allowed to remain in an unmarked grave for 40-plus years. But in Indianapolis that sort of neglect and disrespect for musicians, particularly Black musicians, is not abnormal.

Guitar Pete Franklin was not your average local musician. In a career that stretched through four decades, Guitar Pete recorded on some of the biggest labels in music, alongside some of the greatest names in the blues genre.

In contrast to fellow Hoosier blues legends like Yank Rachell, Scrapper Blackwell, and Leroy Carr – who all migrated here from the South, Franklin was born and raised in Indianapolis. Franklin’s exposure to blues music came at an early age when pianist Leroy Carr was a boarder at Franklin’s childhood home just prior to his untimely death in 1935. Franklin acquired significant skills on the family piano before taking up the guitar at age 11.

As a young man he learned what would become his primary instrument from Indy blues guitar master Scrapper Blackwell. Franklin’s passion for music was so deep, he dropped out Crispus Attucks to devote himself full time to playing. But his aspirations for blues stardom were briefly put on hold during a two-year stint with the army from 1945-1947.

Franklin’s recording career began in Chicago in a fantastic session for the Opera Records label with St. Louis Jimmy and Roosevelt Sykes. Franklin’s own debut as a leader came in 1949 on RCA Records. Joined by Tampa Red on piano, Franklin recorded four tunes for RCA on January 26 of 1949: “Casey Brown Blues,” “Down Behind The Rise,” “Mr. Charley,” and “Naptown Blues,” which remains unissued to this day.

Over the next few years Franklin would record a series of classic discs as a sideman for blues greats like Jazz Gillum, Sunnlyland Slim and John Brim. But Franklin wouldn’t see another solo release until 1962 when the Indy-based folklorist Art Rosenbaum tracked Franklin down to cut an LP for jazz label Prestige Records’ Bluesville imprint.

The resulting work, Guitar Pete’s Blues was recorded in Indianapolis on July 12 of 1961. The album is widely considered a blues classic and stands as the most enduring example of Franklin’s unique artistry.

“A blues singer is a weird son of a bitch,” Franklin once said in an interview for the summer 1972 edition of Living Blues magazine. I’d guess Franklin was referring to the intense pathos the art draws out of performers. Blues musicians are tasked with exploring some of the most extreme conditions of the human psyche, and Franklin rises to that challenge on Guitar Pete’s Blues. While Franklin shines as a guitarist, pianist and vocalist on the LP, it’s his interpretation of the material, with themes ranging from depression, to drug abuse, to violence that remains the most compelling element of the work for me.

Guitar Pete’s Blues is the only solo LP release in Franklin’s discography. While Franklin was presented with other chances to record and perform in the aftermath of Guitar Pete’s Blues he was unable to parlay those opportunities into any meaningful advancement for his career. Franklin remained in Indianapolis until his hard-living ways contributed to his early death from diabetes at age 47.

“The public should recognize the blues as an art, instead of looking down at it as something that comes out of the slums or the cotton fields,” Franklin lamented in an interview for the liner notes of Guitar Pete’s Blues.

While Franklin’s artistry has been recognized by music fans around the world, his work is largely unknown here in Indianapolis where his eternal resting place lacks even the most simple marker noting evidence of his existence. It’s a tragic ending that should give any music fan the blues.