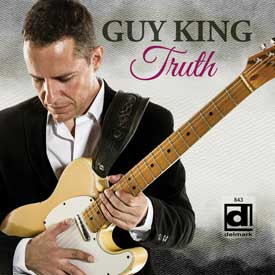 Truth is the Delmark debut from Guy King, a rising superstar in the ultra-competitive Chicago blues, soul, and jazz world. Delmark first knew about Guy’s impressive talent back in 2000 when he was the late great bluesman and Delmark artist Willie Kent’s lead guitarist and band leader until Willie’s passing in 2006. “It’s so exciting to see Guy grow and mature into the major player he has become, leading his own band since then in both blues and jazz settings, always playing and singing with deep soul, passion, and originality,” says Delmark.

Interesting to note that Guy has befriended Grammy award winner Ritz through another Guy, Buddy, and Ritz and King have now collaborated on three fantastic original songs on Truth, including the standout title track, “My Happiness” and “A Day In The Life Of The Blues.” David Ritz has some songwriting clout, having co-written “Sexual Healing” with Marvin Gaye.

We love the tasty B.B. and Albert King licks this King can channel but make all his own, along with his great Ray Charles and Percy Mayfield influences on his vocals, songwriting, timing, and delivery. And be sure to check out his oh-so-funky take on Johnny “Guitar” Watson’s “Dollar Bill.”