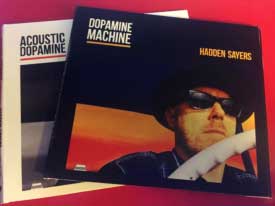 Veteran Texas singer, songwriter and guitar slinger Hadden Sayers has a unique style all his own, a style that pairs taste and soul with blues-rock firepower. With the Dopamine Machine project, his ninth studio recording, the amps are cranked and the guitars set on blistering, ranging from the swaggering “Peppermint Patty” to the longing “Waiting Wanting” and the explosive “Backbreaker.” His blues rocks and he doesn’t sound like anyone else on the scene.

When he’s not performing his own music, he plays guitar for Ruthie Foster, who contributed vocals to this unique double-disc project which includes Acoustic Dopamine, featuring stripped-down, acoustic versions of the album’s tracks. Sayers sat on his bed with a 1954 Gibson acoustic and rearranged the whole album as a solo acoustic set. He then took it into the studio to also make a raw, pure version of Dopamine Machine, capturing the emotional intensity of each song.

It was hard to pick a sample in general so this week you get 1 each but it still doesn’t encompass the range Sayers offers on these albums! Sample all on his website.

Sayers says Dopamine Machine is “more from-the-heart than any of my other releases. It was written and recorded without any concern for what genre it may fit into. That lack of concern for how I fit into the music world made recording even more inspiring than it already is for me, and it shows.”

With Dopamine Machine, Sayers lands squarely back in the hard-rocking blues sound that has been his biggest calling card.

While Dopamine Machine is for driving down the freeway with the band, windows down and stereo cranked, Acoustic Dopamine is for traveling alone down a deserted highway all night long.