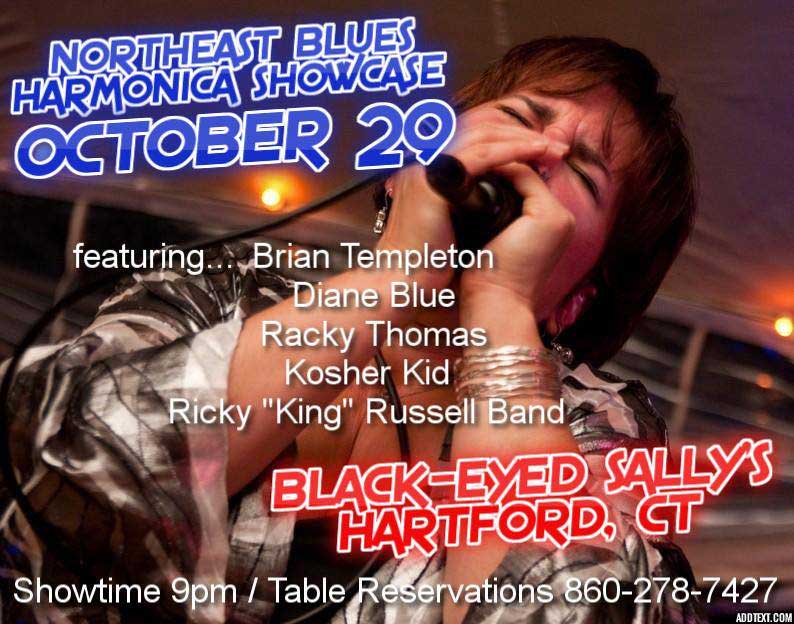 Four regionally and nationally recognized blues harmonica players will lead the show, all backed one of the East Coast’s premier bands, The Ricky King Russell Band.

On harp is Brian Templeton, Diane Blue, Racky Thomas, and The Kosher Kid.

Templeton is the former lead singer of the Boston based blues band, The Radio Kings. He is one of the most talented vocalists and blues harmonica wizards to come along in quite a while. His combination of power and conviction combined with his hard-swinging delivery and dynamic stage presence makes him a true standout. Templeton has toured, backed and recorded with the best of the best in the blues world.

Diane Blue has been on Blues Beat’s radar for some time and now she has emerged nationally as a blues powerhouse. She landed a highly coveted gig as with Ronnie Earl & The Broadcasters. Touring and recording with the Broadcasters has brought her to more audiences.

Rounding out the harp master is the man known to blues and harmonica fans around New England as the blues harp burner, The Kosher Kid. He was the former harp man and founding member of the roots Blues band Easybaby, and a long-time harp man and vocalist for Boston’s West End Blues Band. He now fronts The Incredible Amplifires.

The Kosher Kid has travelled throughout New England for the last 30 years playing music clubs, festivals and roadhouses in various bands as well as supporting nationally touring acts.

Backing this list of harp talent is the Ricky “King” Russell Band. Russell is one of blues’ most seasoned performers and one of the region’s known guitar slingers. He plays with passion and style and always delivers from the heart He was a featured artist at the original House of Blues in Cambridge and Harvard University has bestowed upon him an honorary “Doctorate of the Blues.”