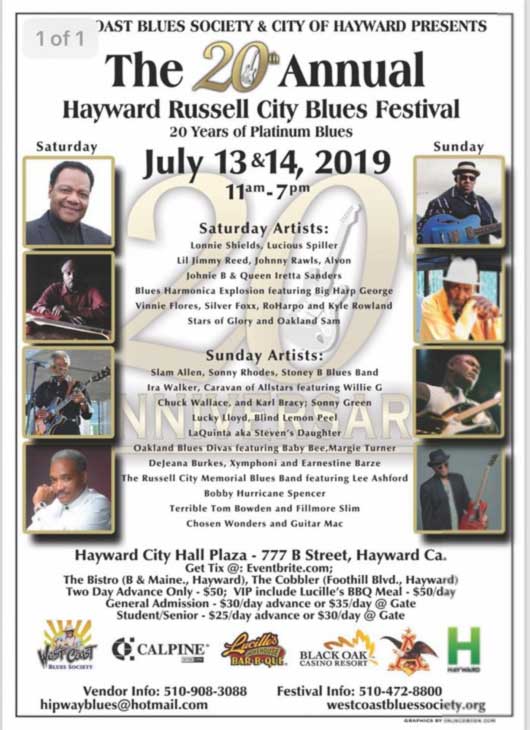 (HAYWARD, CA) – The Hayward Russell City Blues Festival is a celebration honoring the vibrant Blues tradition of the area. July 13-14 will mark the 20th annual and will be held once again at Hayward City Hall Plaza (77 B Street, Hayward, California).

Russell City is a landmark on the map of America’s contributions to world culture giving Hayward a unique musical leg reflecting the African-American experience.

In 1999 the West Coast Blues Society began the Hayward Russell City Blues Festival as a joint venture with the City of Hayward, a celebration honoring the vibrant Blues tradition of the area. 2019 will be the 20th Year of the annual festival, making it one of the oldest continuous Blues festivals in the West.

Next up are Johnie B and Queen Iretta Sanders, a powerful and strong blues couple; the versatile and soulful Mr. Alvon Johnson, a true showman; and Johnny Rawls, a soul-blues legend who has been acknowledged by The Blues Music Awards and W.C Handy Awards, Blues Blast Awards, Living Blues Critics Poll Awards with multiple awards and nominations, including “Soul Blues Album of the Year” and “Soul Blues Male Artist of the Year;” Leon Atkins, better known as Lil’ Jimmy Reed, will deliver classic Louisiana down-home blues tradition; Lucious Spiller whose performance is one that you can easily imagine from the 1930’s; Lonnie Shields from West Helena, AR is genuinely one of the finest of the next generation of the blues deeply rooted in Gospel, soul, and R&B

Southern Soul is the best way to say, Ira Walker; Stoney B grew up listening to the blues (his father is Lil’ Howling Wolf) and has strong influences from Muddy Waters, B.B. King, and Jimmy Reed; Sonny Rhodes continues to be a road warrior with his virtuosity on lap steel guitar and electric guitar. He has been nominated fifteen times for the Blues Music Awards and won the “Instrumentalist-Other” category in 2011; Carl Weathersby is soul-blues singer, guitarist, and songwriter who has worked with Albert King and Billy Branch, among others and was nominated for W.C. Handy for Best New Blues Artist in 1997.

The Blues is a condition, Blues Music is the cure!