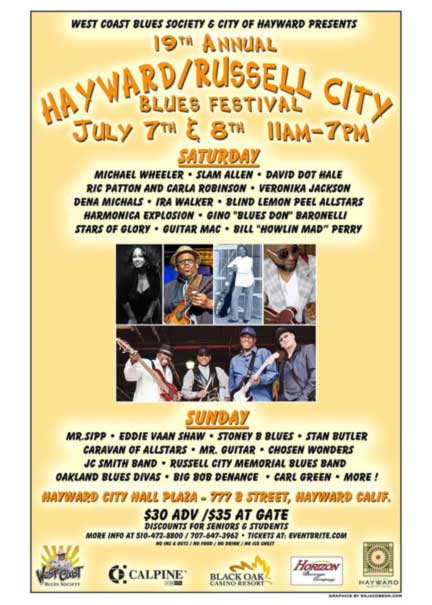 (HAYWARD, CA) – The Hayward-Russell City Blues Festival celebrates the rich history, musical and cultural art form found in Russell City and Hayward during the post war years from the 1940’s thru the 1960’s. The event will be held at Hayward City Hall Plaza (777 “B” Street, Hayward, California) from 11am-7pm.

This little town of African-American’s, who migrated from the deep south, was one of the proving grounds for many blues musicians. Russell City, an unincorporated area of Hayward, California is about 12 minutes from the City of Oakland.

This community of modest houses and small farms along the bay is now gone. During it’s heyday, Russell City was a down home community, known for it’s clubs with dirt floors, bootleg electricity and a steady stream of musicians playing a unique style of Delta Blues. During the early part of their careers, artists such as Big Joe Turner and Big Mama Thornton played Texas, Arkansas and Louisiana style blues in Russell City. West Coast Blues music eventually influenced the traditional sound when horns replaced the harmonica and West Coast Blues was born.

Russell City is a landmark on the map of American’s contributions to world culture giving Hayward a unique musical legacy reflecting the African-American experience. We are pleased to bring those sounds back through the Hayward-Russell City Blues Festival.

Arkansas Blues… In the Dirt & On the Air Tall City Blues Fest is Signature event for Downtown Midland, TX