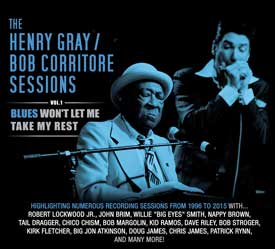 At 90-years young, Louisiana native Henry Gray has amassed an incredibly prolific career in American music. With a history of performing that spans more than seven decades, the acclaimed blues pianist is probably best known for his 12-year tenure, beginning in 1956, with the legendary vocalist Howlin’ Wolf. Gray’s role as a highly in-demand session player has graced such revered labels as Chess, Vee-Jay and United, whereby he was featured on a multitude of iconic recordings including those by Bo Diddley, Jimmy Reed, Jimmy Rogers, Morris Pejoe and Little Walter.

More recently, some of Gray’s further notable accomplishments include; a 1998 Grammy Award nomination for his work on the album, A Tribute to Howlin’ Wolf; a featured segment in Martin Scorsese’s seven part series, The Blues, which aired nationally on PBS; a guest appearance on the live recording, Time Brings About a Change… A Floyd Dixon Celebration, featuring Floyd Dixon, Pinetop Perkins and Fred Kaplan; as well as becoming a recipient of the National Heritage Fellowship Award by the National Endowment for the Arts in 2006.

Gray’s association with harmonica ace Bob Corritore was first established in 1996. Their visceral cohesiveness and long standing musical bond has produced a consistent body of work that’s steeped in purity and tradition. Past collaborative efforts by this formidable pair include the 1999 release of Corritore’s All-Star Blues Sessions, Gray’s Plays Chicago Blues, which received Blues Music Award nominations in 2002 for both Comeback Blues Album of the Year and Traditional Album of the year, and a pair of Corritore’s Delta Groove outings including, Longtime Friends in the Blues, featuring veteran Chicago blues vocalist Tail Dragger, as well as Harmonica Blues, which took the BMA’s top honor for Historical Album of the Year in 2011.

With Gray’s recent 90th birthday (born January 19, 1925), Corritore has taken it upon himself to share more of this truly valuable musical partnership by liberating another treasure trove of melodious gems from his seemingly infinite recording vaults. This first volume presents a 14-song selection recorded over a 19-year period, in which all but four tracks are previously unissued. Gray handles the lion’s share of the vocal duties on ten of these selections, with Robert Lockwood, Jr., John Brim, Nappy Brown, Tail Dragger and Dave Riley providing one vocal each. At the core of these songs are the Gray and Corritore team, who effectively demonstrate their robust musical prowess and understated taste. They are joined on the proceedings by a rotating lineup of some of the blues’ finest musicians for a program of fully-realized songs that alternate between rollicking, partying jumps and shuffles, to the deepest of blues!

Name of Song: Let’s Get High