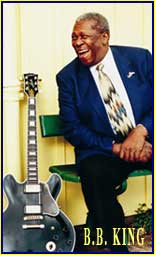 As the basis for American music, the rhythms and musical progressions of blues music has had a public following since the early 20th century. As time progressed, the sounds of blues music have been altered, expanded, and often renamed. The basis of rock ‘n roll, hip hop, rap, heavy metal, and jazz all have a genesis in blues music. To ensure the continued survival of an audience for blues music and expand the financial opportunities for blues and it’s life blood festivals The Blues Festival Guide is committed to the process of outreach and a search for methods to present blues to a wider public.

Blues Music… Sometimes sad, lonely and mournful, but in other cases fully energized and bursting with electric-guitar-fueled vigor, blues is one of the most powerful, influential and popular musical styles to have risen during the last few centuries.

The song structure is simple – much of classic blues is based around a three-chord, 12-bar progression that leaves room for boundless improvisation – and it serves as a foundation for much of today’s popular music.

Today it’s still being picked on the front porches of tar-paper shacks, but it’s just as frequently fired up loud and proud in front of a barroom (or for that matter stadium) crowd. In either case though, it remains a music that reflects hardship, trouble and strife, but also perseverance and strength of character – to know the blues is to be in touch with your true spirit and soul.