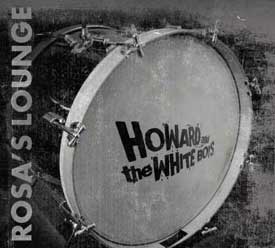 Rosa’s Lounge, the most recent offering from Chicago blues veterans Howard and The White Boys, is named after the legendary Chicago club where the band’s new CD was recorded. Captured live on one of those magical nights where the crowd and band feed off of each other’s exuberance and energy, the recording reveals a group at the top of its game and offers insight into why many consider Howard and The White Boys one of the best live contemporary blues acts of the past two decades. Rosa’s Lounge bears witness to the power of the group when they perform live. This release also lends credence to the Chicago Sun-Times’ recent statement, “You can’t see this high-energy, good time band at a club without leaving with a smile on your face.” All tracks were recorded live at Rosa’s except track 11, which was recorded at JoyRide Studios in Chicago.

Howard and the White Boys is Howard McCullum on bass and vocals, Rocco Calipari on guitar, Pete Galanis on guitar and Jim Christopulos on drums. Chicago, a city steeped in blues history, is where the band has honed their chops since their inception in 1988. They established a reputation as one of the city’s favorite attractions and regular appearances at Buddy Guy’s Legends. Buddy Guy has been their unofficial mentor and his support for the band has been instrumental in exposing them to a wider audience. He has taken them on several major Midwestern tours as his opening act, and has often jumped onstage to jam with them when they appear at Legends. He also gave them the ultimate endorsement by making a rare guest appearance on their third release The Big $core. After only a few months, they got their first big break by opening for B.B. King. The band has performed with the biggest names in blues: Koko Taylor, Otis Rush, Albert King, Junior Wells, Lonnie Brooks, Luther Allison, Bo Diddley, and Chuck Berry.

Between 1994 and 1997, the group made two highly acclaimed recordings, Strung Out On The Blues and Guess Who’s Coming To Dinner?, for Los Angeles based Mighty Tiger Records. They began traveling extensively across the United States and their growing popularity captured the attention of Philadelphia based Evidence Records. The Big $core was the first of three successful discs released by Evidence, and the band wasted no time in promoting it via the first of many trips across Europe. The group then released a well-received live CD for Evidence entitled Live At Chord On Blues. In 2007, Evidence released the critically acclaimed Made in Chicago which showcased the group’s versatility and encompassed the funk, R & B, and rock styles that have become Howard and the White Boys trademarks.