Hurricane Ruth :: BORN ON THE RIVER 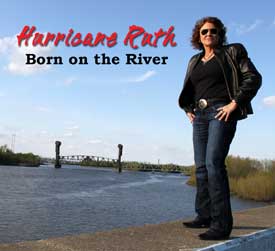 Hurricane Ruth’s sophomore album, Born On The River, is an eclectic group of 11 original songs, the title track of which together with several other songs were inspired by lead vocalist Ruth LaMaster’s hometown of Beardstown, Illinois, a small town on the Illinois River. Joining Ruth on the album and on stage are the powerhouse trio of David Lumsden (lead guitar), Gary Davis (bass guitar) and Jim Engel (drums). The album is produced by Andon T. Davis, an accomplished, producer, guitarist, and vocalist and a very dear friend of the band. Andon’s direction enabled the quartet to deliver an intense and heavy album that has the same high energy as a live Hurricane Ruth performance. Recording in the comfortable environment of Rax Trax, Rick Barnes and his staff brought out the very best in the band, while Blaise Barton at JoyRide Studios put the finishing touches on a fine production.

Hurricane Ruth originates from central/southern Illinois, packing venues throughout the region. Critics and fans hail their shows as powerful, raw, emotional and dynamic. The band’s contagious energy is evident in their live shows. The center of this energy is Hurricane Ruth herself. Ruth is a captivating performer, who will grab your attention from note one and never let you go. Willie Dixon once told Ruth, “You’re the only hurricane I can appreciate.”

Hurricane Ruth LaMaster started performing professionally in 1979, and found instant success. She acquired the name Hurricane Ruth because no one believed that such a large sound could come out of such a small woman.