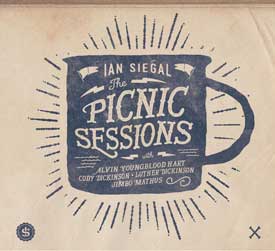 The Picnic Sessions is an uncut diamond, the perfect expression of what happens when five talented musicians with a love of blues and roots Americana get together and play and sing, with no pre-determined idea of the outcome. You can hear the relaxed enjoyment and spontaneity as they swap instrumental roles, add harmonies and contribute ideas. It’s a “back porch” session without the porch!

This CD follows Siegal’s much lauded Man & Guitar, a BBC recording of his solo performance at the Royal Albert Hall as part of Live Nation’s London Bluesfest. Man & Guitar took top spot in MOJO’s roundup of blues albums in 2014, while both CDs confirm Siegal’s position as the finest blues voice the UK has produced since the iconic names of the sixties British blues boom.

Ian Siegal explains the making of The Picnic Sessions: “In June 2013 I went to the North Mississippi Hill Country Picnic, a festival near the town of Oxford MS and home turf for the Dickinson brothers and Alvin Youngblood Hart, my cohorts in the Mississippi Mudbloods. It’s also local to Jimbo Mathus, who I had long wanted to meet. Everyone was free the next day and up for a jam, so we piled into the Dickinson’s Zebra Ranch studio, sat in a semi-circle, campfire-style around some old ribbon microphones, and played and sang. It was a case of turn on the old tape machine and see what happens.

“Having recorded two albums with Cody Dickinson as producer (The Skinny and Candy Store Kid), I was excited to have Cody available to contribute his ideas and stop total anarchy taking over! We had a blast and recorded ten songs in the space of 2 leisurely afternoon sessions.

“This, very definitely, is old school. There are no concessions to modern technology; and there was not a lot of planning either. Everyone simply grabbed the nearest instrument and played, so you can hear guitars, mandolin, mandocello, and banjo among the various instruments used.

“There are songs of mine I haven’t played in years, some traditional covers, and a few new songs I wrote on the way to the festival (with some on-the-spot re-writes in the studio). There’s something liberating about recording casually without the pressure of having to produce an album. So don’t expect perfection, it’s more to do with the vibe, which you can gather from some of the banter that ensued between songs. We had a blast, like kids let out of class!”