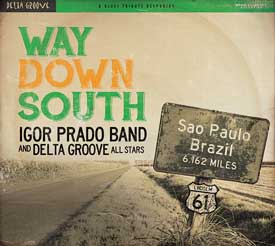 “Keeping the Blues Alive” is the ubiquitous mantra that’s become the battle cry of the modern-day blues community. To those unaccustomed with this tenet, the phrase can often imply that this enduring, beautiful and quintessential American music is hastily approaching its twilight years. One merely has to cast an eye southward, towards the Equator in São Paulo, Brazil, to find evidence that the blues is still a vital and thriving form of soulful communication, courtesy of the strikingly talented and notably youthful quartet, the Igor Prado Band.

At 11-years old, Igor Prado fell in love with the guitar. Completely self-taught, this promising lefty learned to play a right-handed guitar upside down. Together with his brother Yuri Prado on drums, these two siblings embarked on a remarkable 15-year journey beginning in 2000, which encompasses numerous recording and production credits, in addition to sharing stages with many of the idioms most revered veterans. Bolstered by the auspicious talents of bassist Rodrigo Mantovani and saxophonist Denilson Martins, the Igor Prado Band eventually came to the attention of the well-traveled and finely-tuned ear of American blues harmonica player and vocalist, Lynwood Slim. A lifetime bond forged out of mutual respect and admiration was formed, culminating in the expertly crafted and highly acclaimed 2010 release, Brazilian Kicks on Delta Groove.

Today, the Igor Prado Band has become one of the most popular and in demand blues outfits for any artist seeking mature and authoritative, yet sympathetic backing support in South America. Way Down South represents the very best of these frequent collaborations with recording sessions gleaned from south of the border and spanning 2011-2014. Here Igor and the boys are joined by a myriad of talent assembled from the Delta Groove roster and beyond including Kim Wilson, Sugaray Rayford, Mud Morganfield, Mitch Kashmar, Rod and Honey Piazza, Junior Watson, Monster Mike Welch, Wallace Coleman, Omar Coleman, JJ Jackson, Randy Chortkoff and Raphael Wressnig. Of special note are two songs featuring the late, great Lynwood Slim performing memorable renditions of Lowell Fulson’s “Baby Won’t You Jump with Me” and Paul Gayten’s “You Better Believe It.”

Although it may be a long way from São Paulo to America, the passion and dedication found within the grooves of these recordings will most certainly make the distance between these two locales feel that much closer. Way Down South dispenses any notion that the blues is not only alive, but doing quite well indeed, thanks in large part to this incredible Brazilian ensemble.