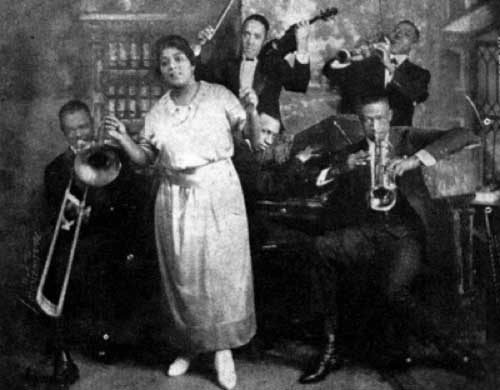 Mathematical sticklers may demur, but I take pleasure in declaring the twenties have finally arrived again. The ringing in of a new decade—a twenties that may or may not roar, but will undoubtedly swing—will bring many opportunities to celebrate centennials and deepen our appreciation for the history of syncopated music.

One of the most significant events of 1920 from the standpoint of popular music in the United States was the recording of Perry Bradford’s tune “Crazy Blues” by Mamie Smith and her Jazz Hounds. Its runaway success on the Okeh label made “Crazy Blues” the first significant hit recording in the blues genre. Smith was also the first African American female popular singer to lead a commercial recording.

The disc flew off store shelves in Harlem and racked up 75,000 copies sold in its first month. Some people say it went on to sell a million. I can’t judge the credibility of that claim, but for reference, the U.S. population stood at just a hair over 106 million on the first day of 1920, according to that year’s census.

Historians have often credited “Crazy Blues” with catalyzing the proliferation of so-called “race” records. Its popularity made clear that black consumers now made up a viable market for the recording industry. Whites were already becoming familiar with blues through the compositions of W.C. Handy, particularly “St. Louis Blues” (1914), and others; one of 1919’s biggest record hits was “Blues My Naughty Sweetie Gives to Me” by Ted Lewis and his Orchestra. Sophie Tucker and a handful of other white singers had sung material by black composers in rag and blues inflections.