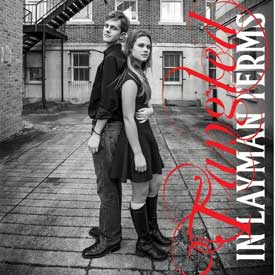 Cole and Logan Layman have grown up making music together. They are both multi-instrumentalists and write original music. They are young, passionate, and all about the blues. Their unique and diverse sound ranges from gritty, foot-stomping acoustic work, to an electrified big-band sound.  They perform nationally as a duo, as a trio with their mother on drums and washboard, or as a full band which includes keys, a horn section, and a professional drummer who happens to be their producer and mentor. No matter how they present their music, the core is rooted in the blues, and it is the undeniable connection these siblings have that shines through and makes them special.

“In Layman Terms delivers on the promise of greatness with their first full-length album, Tangled. Logan Layman’s vocals are deep and amazing with the assuredness of a mature chanteuse while Cole Layman’s guitar work is precise and electrifying. This is a stunning debut album and they aren’t anywhere near their peak!”
– John Porter, blues historian and co-host of “Time For The Blues “

“In Layman Terms, siblings Cole and Logan Layman have released their debut CD and it is a real winner.  Maturity in performance well beyond their years and a freshness, an eagerness to play the blues with exuberance that just puts a smile on your face. ” – Steve Hamilton host of “Fresh Roots News Blues on WNRN”

It’s a thought whose time has come to In Layman Terms!