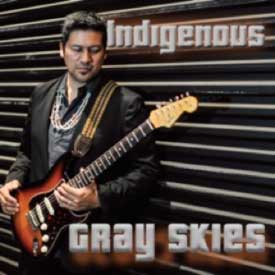 “Be true to who you are and what you want to do.” In an exclusive Blues Rock Review interview, Mato Nanji offered this sound advice to artists looking to break into the music world. Though his words of wisdom are relevant to a wide range of art forms, they are particularly applicable to music that thrives on the hearts and souls of its creators and his kind of social consciousness THAT is so rare in today’s blues and rock.

Mato, longtime front man of Native American band Indigenous makes the effort to improve his craft with each record. His playing and singing have never been better than on his 11th commercial outing, Gray Skies. On this fourth CD for Blues Bureau International, produced by Mike Varney, Mato once again forges ahead, pushing himself to new personal bests. Gray Skies contains the high-caliber guitar playing for which Mato has become known, along with his strong, soulful voice which are applied to a fresh assortment of high-level blues rock songs.

As he has shown in 15 years as a mainstay of the Experience Hendrix Tours he is considered one of today’s guitar greats; more than holding his own playing with such legends as Buddy Guy, Jonny Lang and Kenny Wayne Shepard. He also has shown his diversity adding to the trance blues of Otis Taylor and recording with Los Lobos among many others.

“On a lineup with some of the heaviest guitarists on the planet, including Derek Trucks and Jimmie Vaughan, Mato and Indigenous were widely hailed as one of surprise highlights of Waterfront Blues Festival last year. Mato’s guitar work can easily stand alongside the greats. And for other promoters, the band is super easy to work with.” – Peter Dammann, Artistic Director Waterfront Blues Festival

“I’ve been a fan & supporter of Indigenous for over two decades since my days with public radio station WXPN.  Since then founder and front man Mato Nanji continues to get even better with exceptional fret work and powerful voice accompanied by top flight musicians. They are one of the most exciting live acts today of any genre, plus not only sell extremely well but are a pleasure to work with!” – Bruce Ranes, Sellersville Theater Entertainment Director

Click on our Jukebox to hear “Let it Shine”