Into The Light Set for October Release 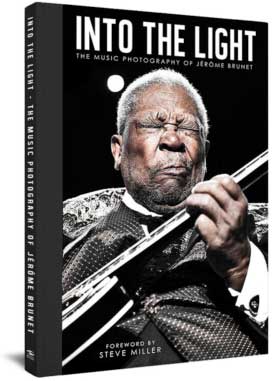 (LAS VEGAS, NV) – World renowned, award-winning photographer Jérôme Brunet is pleased to announce Into The Light, a twenty year retrospective coffee table book set to be released in October of this year and you can pre-order now. The book, which was funded in part by a successful Kickstarter campaign that raised over $30,000, features a foreword by rock legend Steve Miller and showcases incredible photographs of many musical luminaries such as B.B. King, Eric Clapton, Slash, Tom Petty, Bruce Springsteen, Santana, Aretha Franklin, James Brown, U2, The Who, Pink Floyd, and The Rolling Stones.

“I’m known to shoot what is referred to in French as shooting in ‘contre-jour’ or ‘into the light,’ where the camera is pointed directly toward a source of light,” Brunet explains. “After twenty years into my journey as a music photographer I thought it was time to put my work ‘Into The Light’ and share this collection with music and art lovers everywhere.”

Pre-Order Into The Light here.

A portion of the proceeds from this book will go to the Pinetop Perkins Foundation, which provides encouragement and support for young people at the beginning of their musical career and helps provide care and safety for elderly musicians at the twilight of their career.

Jérôme Brunet has enjoyed a formidable career in the live music industry. His iconic photographs have been published internationally in some of the world’s largest outlets including Vanity Fair, Rolling Stone, Time, Billboard, Popular Photography, Variety, Smithsonian, and The New York Times. In addition, he has the accolades to match as he is the recipient of multiple Graphis, PDN, and International Photography awards.

The Standard Edition hardcover book features 208 pages, 9.25×12.75″ inches in size and is printed on heavyweight fine art matte paper, with over 125 color and black & white images.

The Deluxe Edition features the hardcover book in a deluxe cloth covered slipcase with an exclusive signed and numbered 8.5×11″ fine art print of “B.B. King live at the Fox.”