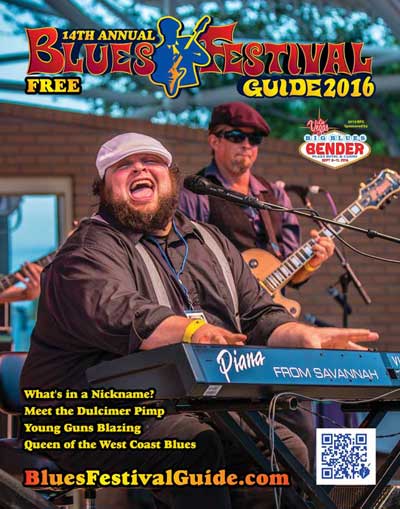 Get your copy of 2016 Blues Festival Guide magazine. Click here to order! Enjoy our feature stories (listed below) …And of course, hundreds of festivals.

Every year, the Blues Foundation presents Keeping the Blues Alive (KBA) awards to both an international and a U.S. blues festival, in recognition of their significant contributions to the blues community. This year, honors went to the Cahors Blues Festival and the Chenango Blues Festival.

The Music They Played on 7th Street Oakland Walk of Fame pays tribute to the great musicians, club owners, record companies and related independent business that put 7th Street, Oakland, CA, on the map as a top entertainment destination. The Walk of Fame is dedicated to those who created, produced, presented and played America’s indigenous musical art forms – blues, jazz and gospel.

In March 2016, the Recording Academy opened the doors of the Grammy Museum in Mississippi – the second in the nation. The blues was born on the Mississippi Delta and the site of the Grammy Museum is a most appropriate location – located at Delta State University, which offers a B.S. in Entertainment and a minor in Blues Studies, and just five miles from Dockery Farms cotton plantation where Charlie Patton, Robert Johnson, Howlin’ Wolf and Pops Staples had lived.

“Fueling the Passion for Music” By Brian Reiser

Joe Bonamassa’s Keeping The Blues Alive (KTBA) Foundation fuels the passion for music by funding programs and scholarships for students and teachers who possess the desire for quality music education, but lack the resources. In this feature, we learn more about why fostering music education is so important and how KTBA is making a difference.

Bing Futch, winner of the solo-duo “Best Guitar” award at the 2016 International Blues Challenge, explains what a mountain dulcimer is, its history, and its appearance in more recent music. With the goal to see a mountain dulcimer in every household, Futch has taught workshops across the country, published a book and released an album – all centered around playing the dulcimer, which he describes as “one of life’s most sublime joys.”

Meet Barbara Newman, who became the new president and CEO of the Blues Foundation in October 2015. The job is a perfect match for Newman, an Ivy League-educated financial expert with experience working for various not-for-profit organizations. A fourth-generation Memphis resident, she’s been around music her whole life and continues to develop her love for the blues.

“Kings and Queens, Dogs and T-Bones: Nicknames and the Blues” By CC Rider

Stage names are common in the music industry, but nowhere are they so prevalent – and so colorful – as in the blues. From B.B. King to Koko Taylor to Muddy Waters, this “listicle” includes some of the most famous blues men and women, their pseudonyms, and how they got ‘em.

“Cookin’ In Louisiana with a Side of Blues” By Kenny Neal

Famous blues musician Kenny Neal gives a glimpse into his life growing up in Louisiana in a large family passionate about both food and music. He says, “One thing I know for sure, the food here in Louisiana is different from anywhere in the United States. It’s something about our music and food – it goes together.” The bluesman is kind enough to share his recipe for okra, shrimp and sausage. Yum!

As the daring, diminutive and demonstrative “Queen of the West Coast Blues,” Sugar Pie DeSanto has been a heralded performer for almost seven decades, and she continues to “wow” at performances with her talent and energy. Author T. Watts, who has been on road with Sugar Pie as her road manager, describes how this multifaceted entertainer evolved from the start of her career, to sharing stages with Howlin’ Wolf, James Brown, Jackie Wilson, Rufus Thomas, Otis Redding and countless others, to being sought after internationally today.

Cruising on the Legendary Rhythm and Blues Cruise in October 2015, author Kate Martinelli shares details about her first visit to New Orleans, which also happened to be the ship’s maiden port of call. She takes us through the streets of New Orleans and on board – catching Mardi Gras beads at Terrance Simien’s performance, chatting with Marcia Ball about historical sites on the mighty Mississippi, and meeting the late Allen Toussaint.

Blues’ young performers strive to preserve the tradition of the blues as well as evolve the music into the future. They face the same daily routines and challenges as most youth, but at night they jump on stage and bring down the house playing the blues. In a genre that is little acknowledged by most youth, blues’ young guns stand out in their individuality, talent and passion.

The Young Guns feature is accompanied by a sidebar on the blues camps, workshops and programs available to youth musicians, which are essential to continuing the blues into the next generation.

Share. Facebook Twitter WhatsApp
Previous ArticleGhost Town Blues Band Will Perform Over 20 North American Festivals in 2016
Next Article This weekend is the Gator by the Bay Festival in San Diego, CA