Jack Mack & The Heart Attack Horns :: BACK TO THE SHACK 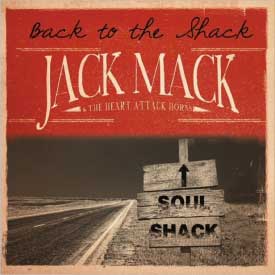 Jack Mack’s sweet, funky soul music has earned a critically acclaimed 30-year legacy of success in the music business that includes ten records, blockbuster movie soundtracks, and hundreds of global television and stage performances. They’ve circled the globe performing concerts, clubs, festivals and some of the world’s most outrageous private affairs. Their smokin’, Southern-flavored R&B and soul is inspired by the legendary artists who recorded for influential labels such as Stax/Volt and in locations rich in musical history such as Muscle Shoals, with hints of Philadelphia and the Motown sound in the mix as well.

Back to the Shack is their latest album, featuring 10 soulful and bluesy tunes, nine co-written by the band and all performed with a fresh, contemporary approach. The album, coming on the heels of the group’s 2014 EP, Lookin’ Up, which was produced by Grammy-winning blues producer Tom Hambridge, features one of New Orleans’ favorite sons, vocalist and co-writer Mark Campbell, as well as guitarist and songwriter Andrew Kastner and the world- class horn section The Heart Attack Horns.

They’re joined by some of the finest studio and touring professionals — musicians who have worked with successful artists such as Robert Cray, Keb’Mo’, Bonnie Raitt and Taj Mahal. These include keyboardists Mike Finnigan and Carlos Murguia, Tony Braunagel and Les Falconer on drums, trumpet mavens Les Lovitt and Lee Thornburg, and others. Singer Melanie Taylor (who has performed with Aerosmith and John Mayer) adds sparkling backing vocals to the opening track, “Standin’ Before the King.”