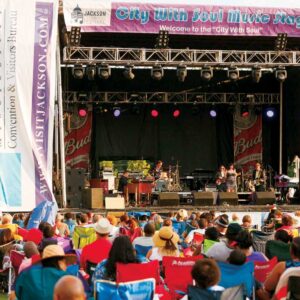 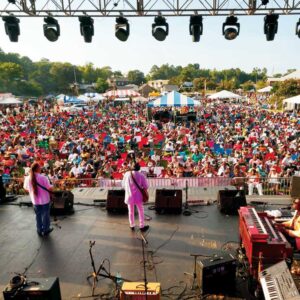 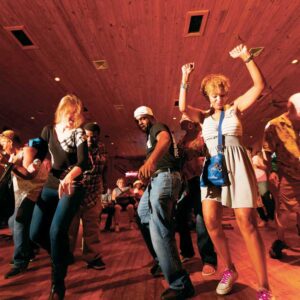 JACKSON, MS – The Jackson Rhythm and Blues Festival is set for its third (3rd) year and It’s Boomin! The event will be held August 14-15, 2015 at the MS Ag Museum and it will offer a stellar music mix and line up guaranteeing a good Jackson, Mississippi time with over 30 Artists on 5 stages, including 4 indoor-venues, a boost from last year. These venues are transformed into Juke Joint replicas to give you that down home blues feeling….It’s Boomin!

Are you a first timer? Well let me warn you, the aroma of deep-fried, fresh Mississippi farm-raised Catfish, succulent ribs, tender pulled pork, and beef brisket will escort you through the gate. Concerned about that August sun? Step into one of those 4 indoor air-conditioned Juke Joint replicas, grab a chair and hold on! There’s live music in each one! Sorry, this is not a BYOB affair, but we have an array of premium signature Festival drinks, wine, and ice-cold beer. So you don’t drink alcohol? The lemonade stand will fit you just fine. Last year it was so good, festivalgoers were buying two at a time… It’s Boomin!

The festival is so engaging; it feels like a big reunion. Don’t be surprised if you find yourself swaying, dancing, hugging and holding hands with perfect strangers that instantly become family because the music has torn down any barriers and captured you… It’s Boomin!

The City with Soul Music Stage, is the main stage where you can relax on the lawn and listen to a mix of Rhythm and Blues, Jazz and Neo-Soul from Artists, such as: The Isley Brothers, Featuring Ronald Isley and Ernest Isley, whose musical career spans over 5 decades with over twenty Top 100 Singles and over twenty Top 20 Albums; Chaka Khan, the “Queen of Funk”, who has won 10 Grammys and has sold an estimated 70 million records worldwide; and Grammy Nominated R&B Singer/Songwriter Raheem Devaughn, known for his Neo-Soul style and charismatic lyrics, “It’s Boomin”!

Swing by the Downtown Divas Den, the Highway 49 Blues Shack or the Farish Street Stage (three air-conditioned buildings converted into Juke Joints) to experience a time when daylight would find you surrendering to the irresistible melodies and rhythms, heartfelt stories, and intense emotional impact of a city, where so many musicians got their start. You will find living blues legends there, like Bobby Rush, Grammy nominated Dorothy Moore and Denise LaSalle!

The Jammin Jailhouse Acoustic Stage, also indoors, will stir your soul as the sound seeps through the walls, while you discover the grounds, the authentic goods and wares that offer keepsakes so you can always remember the time when you found your Soul!

The Jackson Rhythm & Blues Festival is where you want to be on August 14 & 15, 2015 for the very best in live rhythm and blues entertainment with the warm ambience of seeing an old friend. Make your plans to attend the Jackson Rhythm Blues Festival and join us for two unforgettable days that’s sure to set your soul on fire. Logon to www.jacksonrhythmandbluesfestival.com to buy your tickets today and find out more information about the festival! Extend your stay to discover some of Jackson’s more than 300 restaurants and nearly 30 attractions and the friendliest people you can find!

Ayron Jones and The Way

Jackson, MS is called the City with Soul because we embody a rich storied history of cultural diversity coupled with a strong heritage of music and culinary offerings like none other. You won’t find friendlier people to engage with while discovering all that we have to offer. We have hundreds of events that offer an array of choices from heritage festivals, to antique shows, symphony concerts, stage plays, comedy shows, International competitions and sports classics. Open up a world of new adventures when you travel to the City of Jackson, Mississippi – the State Capital.

If you are a history or culture buff, there are countless museums and attractions, Civil War and Civil Rights sites just for you. One of the newest attractions is the Mississippi Children’s Museum. This is a place where your imagination can be inspired by a unique educational experience. If you are a music lover, you can stir the soul with great blues, gospel, jazz, and so much more. Jackson also has 13 blues markers throughout the city. With friendly people, hundreds of events and great music, what more can you ask for? Great food of course!

Whether you are seeking fine cuisine or some good “down home” cooking, you’ll find it in Jackson! We can please all of your taste bud’s sensory desires. We offer a plethora of choices from charming neighborhood café’s, where food is amazing and you’re treated like family, to fine cuisine prepared by chefs like Tom Ramsey, who recently won “Guy’s Grocery Games” on the Food Network.

Jackson, MS is a music destination. We have a rich music legacy and we are the true birthplace of the blues, complete with unforgettable artists, recording labels, clubs and historic sites. To honor this legacy the Jackson Rhythm & Blues Festival was birthed and is celebrated yearly the third week in August.