James Armstrong :: BLUES BEEN GOOD TO ME 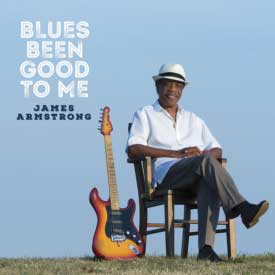 Catfood Records announces an October 20 release date for Blues Been Good to Me, the new CD from James Armstrong, which he produced with Blues Music Award-winner Johnny Rawls. This is his third album for Catfood, following Blues at the Border (2011) and Guitar Angels (2014).

Recorded primarily at Sawhorse Studios in St. Louis, as well as at associate producer Jim Gaines’ Bessie Blue Studio in Tennessee, Blues Been Good to Me showcases the vocals and guitar of James Armstrong, backed by a hand-picked group of musicians who have played with him on numerous live shows, which made for a very comfortable fit. The band includes Matt Murdick – keyboards, vocals (who has worked with Buddy Guy, John Primer, Little Milton, and Johnny Johnson); Johnny McGhee – rhythm guitar (one of the founding members of LTD and has worked/recorded with Marvin Gaye, Natalie Cole and, George Duke); Andrew Blaze Thomas – drums (who has worked with Billy Branch, Bernard Allison, Ana Popovic and Ronnie Baker Brooks); and Darryl Wright – bass (who has worked with Mavis Staples).

“Whenever I’m working on a new CD, I always like to be extremely prepared,” says James Armstrong about the recording process. “On this project, it didn’t turn out that way, which seems like a blessing in hindsight. I was extremely busy when I was writing songs and arranging music for this project. Four months prior to going into record, I played over 70 shows. I had a European Tour in March and did 19 shows in 25 days in different cities, came home for two weeks and worked in the States and then flew to Spain for two weeks playing 12 shows back-to-back in different cities in 14 days.

“When we got into the studio in St. Louis, everyone knew how stressed I was because I didn’t feel prepared. Prior to the session, I had sent demos for everyone to hear. Two songs I had to finish writing at the session, ‘Second Time Around’ and ‘Old Man in the Morning,’ but I told myself that I was just going to see what happens. I had asked Johnny Rawls to produce the CD with me, who is a master and a veteran at recording.

“Working with the legendary Jim Gaines as associate producer was a special treat. I recorded all of my guitar and vocals at his studio in Tennessee. Jim really helped me get over some of my fears and limitations from my injury in 1995 which resulted in permanent nerve damage to my left hand. I was able to do things on the guitar I have not been able to do since my injury.”

The 10 tracks on the new disc include a number of originals, as well as exciting covers of songs from Robert Palmer (“Addicted to Love”), and Marvin Gaye  (“How Sweet It Is to Be Loved by You”).

Armstrong explains the genesis of the two cover songs: “Growing up in California as a teenager I wanted to be Jimi Hendrix. I listened and played a lot of rock ‘n’ roll. Darryl Wright (bass player on the CD) came to me with this song idea to put in to my live show.

After doing it for a while, I realized I wanted to record it. I always enjoy changing certain song formats like rock, country, etc. into my style of the blues.

“I’ve always loved Marvin Gaye’s and James Taylor’s versions of ‘How Sweet It Is,’ so I decided to speed it up with a swing-shuffle feel. With my country music background, I wanted to add a little country guitar lick in there. Also, I’ve never heard the song done before with slide guitar.”

Armstrong also reprises a new version of “Sleeping with a Stranger, a song he originally recorded as the title track of his first album for HighTone Records. “I wrote and recorded ‘Sleeping with a Stranger’ for HighTone Records in 1995, and it was the first song I ever had any major success with. I stopped playing it in my live shows for the last ten years but I’m always getting requests to do it. I decided to re-record it. In the early ‘90s I was in a relationship that I was not happy with. One morning, I woke up and there was a poem that she wrote called ‘Sleeping with a Stranger’ on her pillow. I changed a few words, added music and the next thing I knew I had a song.”

James Armstrong will continue touring throughout the summer and fall in support of the new album, and summarizes his feelings about it thusly: “I’m extremely happy with the results of the recording. Blues Been Good to Me is the most exciting recording I’ve done in years.”