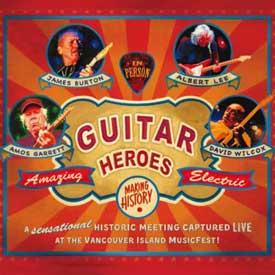 Guitar Heroes, a very special live recording on Stony Plain Records, teams acclaimed guitar masters James Burton, Albert Lee, Amos Garrett and David Wilcox for what promises to be one of the most heralded albums of the year.

These four Telecaster Masters shake up the rock and roll universe on this historic release, recorded during a one-time special performance at the Vancouver Island (Canada) MusicFest on July 12, 2013. Rooted in blues and rockabilly influences, each of the four legends have shaped and changed the sound of popular music since the mid-1950s. The musicianship, good taste, camaraderie and energized interplay showcased on stage that night made guitar history, now preserved on recordings for everyone to experience. As Albert Lee, himself, proclaimed that night, “Welcome to my dreams here!”

Backing the four Guitar Heroes for this concert were the members of Albert Lee’s regular touring band: Jon Greathouse (keyboards/lead vocals), Will MacGregor (bass) and Jason Harrison Smith (drums/background vocals). The 11-song repertoire recorded for the program is presented just as it was heard that night, with no editing, overdubs or studio sweetening. Just four amazing guitar players having fun together and creating a magical night of music. Songs run the gamut of roots music, with explorations into blues, rockabilly, rock ‘n’ roll and a touch of country.

Musical highlights on Guitar Heroes abound, such as James Burton recreating his classic guitar licks on “Susie Q,” just as he did on the Dale Hawkins’ original single back in 1957; Albert Lee going on amazing guitar runs all over the album’s closer, “Country Boy;” Amos Garrett launching into the stratosphere with his string-bending take of the rock ‘n’ roll gem, “Sleep Walk;” and David Wilcox going full-out with two masterful solos on “Comin’ Home Baby.”

“As Artistic Director of the Vancouver Island MusicFest, I get to dream up collaborations like these for what will hopefully become once-in-a-lifetime musical experiences,” says Doug Cox on the album’s liner notes. “This one worked. It’s truly rock and roll heaven, right here on Earth where there is indeed, a hell of a band!”

Each of these players has a resume that would be the envy of any musician on the planet. “There are moments of deep musical inspiration on these grooves; the kind that only happens when the music becomes bigger than the individual players,” Doug Cox summarizes in his notes. “All egos were put aside, nothing to prove, no young, nervous energy, just veterans digging in with musical colleagues in the truest sense. Thank goodness we recorded the show, although at first it was just to be a souvenir for the players. Once we heard the results we knew it had to be shared with the world. This is pure, passionate music.”

Stony Plain Records (which is distributed in the U.S. by ADA) released Guitar Heroes in both CD and vinyl LP formats. The LP version is pressed on 180-gram vinyl and includes a card enabling purchasers to download the full 11 tracks on the CD edition.