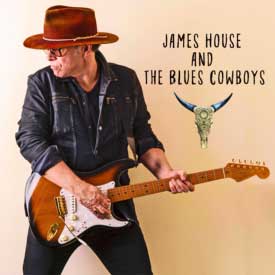 “James House is one of the premier songwriting and musical talents in the world today. His ability to flourish in so many different genres is a testament to his lifelong dedication to his songwriting craft. Plus, he is one helluva singer. On a personal note, many of my career-defining songs have been written with James. He is very good at taking my wacky ideas and turning them into real songs. “  – Joe Bonamassa

Nashville-based singer-songwriter James House set to release an album of blues to his fans that have been begging him to do for a long time. His love of the Blues has always been an undercurrent tone to his tunes. The self-titled album will come out on August 3 to worldwide audiences, and this time, James is singing from his gut.

Created by James in his studio, Cabin In The Woods, located in a rural area of Nashville, he called on some hot-shot musicians with great pedigrees to help: Todd Sharp (Rod Stewart, Hall & Oates), Mike Bradford (Uncle Kracker), Will Kimbrough and Kenny Greenberg (an A-list Nashville studio guitarist). He tapped into his vault of songs that fit the sound of the ever-evolving songwriter and pushed the record button, letting the magic happen organically.

Songs from this album are swinging, haunting and sometimes hopeful with House pulling out all the stops by using his creative influences like John Lee Hooker, William Faulkner and the wild violin strings of Eamon McGlouglin (The Greencards, John Paul White, and Ashley Monroe) to provide some fire. You can hear how his craft intersects with his art with songs like, “Long Way Down” that recall John Lee Hooker, and “Well Ran Dry” – that asks the question, what if William Faulkner wrote a blues song?

As a singer, House’s voice has that rough soul ache that is his secret weapon as a writer and performer. As a guitar player, he lets his Fender do the talking as the riffs fly off his fingers providing a backdrop to his melodies. His songs have been nominated for Grammys, Country Music Association Awards, Academy of Country Music Awards and climbed their way to the top of the Blues charts.

“There is a vulnerable truth in James House’s songwriting that is very humbling for any writer to experience …and that voice!!! That voice is pure emotion, heartbreaking and soul lifting at the same time. – Beth Hart