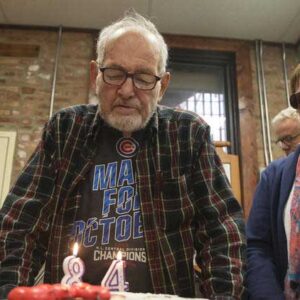 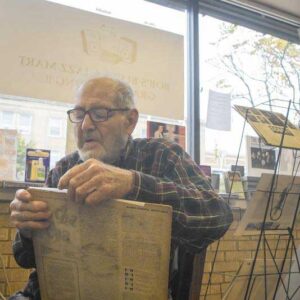 (Chicago, IL) – When you’ve spent most of your life in the record business, how do you celebrate your 84th birthday?

By opening a record store, of course, which is how Bob Koester — owner of Chicago’s Delmark Records label and founder of the shuttered Jazz Record Mart — marked the grand occasion over the weekend.

It’s a fair bet that not many folks feel like launching a business at such an exalted age. But Koester looked and sounded as if he couldn’t be happier, a standing-room-only crowd packing the place. They heard blues greats performing, indulged in chocolate-mousse birthday cake and, of course, pawed through an inventory Koester estimated at 5,000 items.

“Big Bill Broonzy didn’t show up?” Koester joked to the visitors, referencing a Chicago blues icon who died in 1958.

“Blind Lemon?” he said about bluesman Blind Lemon Jefferson, who died in 1929.

“I’ll never speak to them again!”

Quips aside, no one seemed to revel in the proceedings more than Koester, who listened raptly as Chicago blues legends Lurrie Bell and Johnny B. Moore duetted in the back of the store. Bell brought plenty of grit and gravel to “Every Day I Have the Blues,” the growl of his voice answered by the wail of his guitar. Moore sounded imploring in “I’ll Play the Blues for You” and alternated solos with Bell throughout the set.

When Chicago bluesman Eddie C. Campbell dropped by and joined in the music-making, there was no question that musical royalty was paying homage to a man who has championed blues and jazz for more than half a century.

“We’ve had some great music here today,” Koester told the audience after the music stopped and before the cake appeared.

“Next year we’ll have some jazz.

“Now please buy some records — the artists get the money.”

As the name of Koester’s new store attests, blues and jazz share equal billing here, with gospel and related genres represented as well. The recordings are packed into three adjoining rooms, much of the merchandise deriving from used collections Koester has purchased.

“Uncle Joe died, and nobody wants his records,” said Koester, quoting the kind of call he gets all the time. “Would you like to buy them?”

Yes, he would, and now he has a bona fide place from which to sell them.

That left Koester, who began selling records in Chicago in the late 1950s and established the Jazz Record Mart brand in 1962, without a store. Though he said he always has loved running Delmark Records, an internationally admired Chicago jazz and blues label, he missed daily contact with his customers.

So a couple months after shutting the Jazz Record Mart, which stretched across 5,000 square feet, Koester began selling records out of the front lobby of the Delmark Records studio, at 4121 N. Rockwell St.

“Ever since he closed the store downtown, he was thinking he wanted to open another store,” said Sue Koester, the impresario’s wife.

“He wanted to do it on the same scale as he had downtown, but in a neighborhood where rents were better.

“But it seemed too much for an 83-year-old guy to bite off. So we did the Delmark store — but that was too small for Bob,” she said, referring to the 600-square-foot space.

“He’s just got retail in his genes.”

Thus the Koesters began looking for a new storefront.

“He walked in here, and he said: This is the place I want,” she recalled.

“The floor,” he said. “This was once rented by a company that did floors, and they’ve got a really great floor. Also, it’s pretty close to the house, and the rent is a lot better than downtown.”

As of now, the store has one employee: Bob Koester, who works Mondays through Saturdays.

“I think it’s great that he can be here with the customers,” said Sue Koester.

“When I first met him 49 years ago at 7 W. Grand,” where the store was then located, “his love of the music came through, and he could meet the customers.

“This is where he feels comfortable. He didn’t want to become a major internet site. He likes the bricks and mortar, the back-and-forth with the customers.”

The new shop will present in-store events like Saturday’s once a month, for starters, the next one featuring jazz and blues movies starting at 1 p.m. Nov. 19.