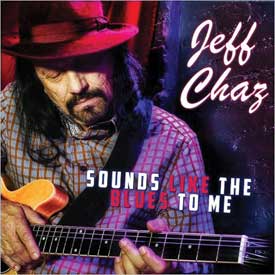 Sounds Like The Blues To Me is Jeff Chaz’s first album of all-new material since his post-Hurricane Katrina release In Exile in 2006. Originally from Creole, Louisiana, his travels eventually brought him to the Home of the Blues, Memphis, Tennessee, where the favorite music of his formative years began. His incendiary live performances continue to be seen by thousands upon thousands of music-loving visitors to New Orleans each year — people from all over the world who make pilgrimages to the Crescent City in search of the blues. In the course of his long career, Jeff Chaz has performed with such legendary blues artists as Albert King, Little Milton, Ruth Brown and many others.

Jeff’s unique style of blues incorporates the style of Memphis combined with the mixture of New Orleans rhythms. “It is Memphis barbecue meeting up with New Orleans gumbo,” quips Chaz.

Besides his catalog of CDs and substantial radio play, Jeff’s music can be found on all 60,000-plus TouchTunes Jukeboxes in North America, and has recently been added to machines in Europe as well. Among his past awards and achievements are winning the first Beale Street Blues Society Award and being asked to sing “Amazing Grace” on the opening day of the Dr. Martin Luther King, Jr. Civil Rights Museum in Memphis, Tennessee. After a command performance entertaining the masses at the Museum with his band, the event coordinator dismissed the rest of the musicians — with the exception of Jeff, who was honored with a surprise request to perform the well-known spiritual song a cappella.