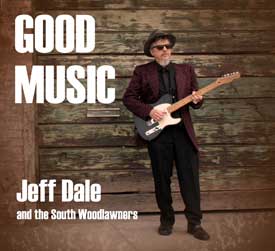 Steeped in his Chicago roots, Good Music, has it all: upbeat, lively celebration, messages for social justice, and bitter heartbreak served up the way only the blues can. With the authenticity of “born in Chicago,” Jeff Dale demands serious attention. After learning the blues firsthand on the Southside, he accompanied Lowell Fulsom, Pee Wee Crayton, Etta James and Honeyboy Edwards, among others. His third release sums up his gritty, true blue talents as a singer, songwriter and guitarist who lives the music.

From the opening “Town Line Road,” to the deeply emotional “Final Destination,” Dale has put together this offering from the depths of his soul. Balancing the dark with the light, Dale’s playful sense of humor also shines bright on such tracks as “Naked Woman in My Bed,” and “My Brain Took the Whole Night Off.”

Dale is an award winning songwriter and performer, born and raised on the south side of Chicago. Before he could shave, Jeff was exposed to the music and live performances of Hound Dog Taylor, Muddy Waters, Howlin’ Wolf, Koko Taylor and many more practitioners of Chicago blues. “In the neighborhood I grew up in,” says Dale, “if you had your antennas up, you could feel the blues right there.”

After learning to play the blues from two Chicago west side musicians when he was 13, and writing his first blues based song at 14, Dale became an accompanist for legendary blues performers like Lowell Fulson, Pee Wee Crayton and Etta James among others. His band released two albums of his original material in the ‘80s, and after an absence from the scene, Dale came roaring back into the public eye in 2009 with a new band, The South Woodlawners on his album, Blues From The Southside Of My Soul. Jeff also befriended the late David “Honeyboy” Edwards, the last of the original Delta bluesmen, accompanying him at the Grammy Museum in Los Angeles and elsewhere.

As Louis Armstrong famously said, “There’s only two kinds of music: Good and bad. I play the good kind.” Pops’ modesty notwithstanding, Jeff Dale plays great music. Get hip and get it in your soul… it’s Good Music.