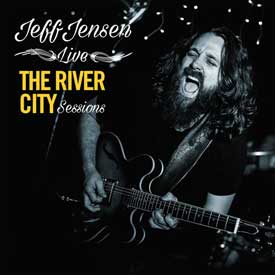 Jeff Jensen feels it is his responsibility to make the effort to communicate his passion with each member of the audience every night. After all, music is art, and art is the physical form of emotion. This is exactly what you’ll find within The River City Sessions.

Most people are in for a shock the first time they experience a Jeff Jensen Band performance. It starts with the trio mixing an eccentric blend of soul, rock, and American roots music with a deep blues influence. Suddenly Jensen feels the spirit, transforming into a whirling dervish of sight and sound as he bounds across the stage, barely able to contain himself. His passion is there for all to see, a rare occurrence in these times of buttoned-down music-making. At first, the sheer emotional force he creates can be overwhelming. Then you realize that all art is an expression of the soul, of the power of the life-giving force that created the universe.

After releasing two acclaimed albums, Road Worn and Ragged (2013) and Morose Elephant (2015), and performing over 400 concerts in 30 states and 10 countries, it was time to capture the band’s true emotion and energy. Recorded 100% live in front of an amazing studio audience; this album contains 8 of the band’s original songs and 3 of their favorite interpretations. With significant and poetic lyrics throughout the entire album as well as true musical integrity, one can’t help but feel the inspiration in this release. From the vulnerable and honest “Make it Through,” “Ash and Bone” and “Can’t Believe We’re Through,” to the increasingly significant “Empty Bottles,” this album is Jeff Jensen. And from the deep blues originals like “Find Myself All Alone” and “Brunette Woman” to the guitar theatrics and megaphone flare on “Heart Attack and Vine,” this album truly captures the Jeff Jensen Band.