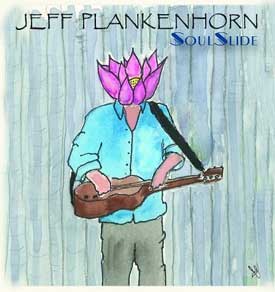 Throughout SoulSlide, Plankenhorn plays a blend of blues, soul and rock on a stand-up lap steel guitar dubbed “The Plank” (which also happens to be Jeff’s nickname), which he designed and is in the process of beginning mass production.

Produced by Plankenhorn, Ross Hogarth (Keb’ Mo’, Ziggy Marley) and Miles Zuniga (Fastball), the even-dozen tracks on SoulSlide include a number of Plankenhorn originals, plus a kickin’ cover of Sam and Dave’s “You Got Me Hummin’ and a never-released Willis Alan Ramsay cut, “Mockingbird Blues.” Additional tunes on the new album were co-written with Grammy-winner Gary Nicholson (“Lose My Mind”), Bret Dennan (“Vagabond Moonlight”) and Zuniga (“Vagabond Moonlight,” “Dirty Floor” and “Born To Win”).

“My dream was to mix Sacred Steel influences like the Campbell Brothers and Robert Randolph with the Dobro stylings of Jerry Douglas and Uncle Josh Graves,” says Plankenhorn about his unique sound. “Plus, I’ve been a singer first all my life and wrote the majority of the tunes on the new CD.”

Special guests on SoulSlide include Grammy nominee and Blues Music Award-winning singer Ruthie Foster, who duets with Jeff on a song titled “Like Flowers,” a Rolling Stones-style track Jeff co-wrote in the vein of “Tumbling Dice,” based on a quote from author Charles Bukowski. Foster also sings backup on the song, “Dirty Floor.” Original Texas soul man Malford Milligan (Storyville) and Jeff sing a duet on the Sam and Dave classic, “You Got Me Hummin’.” Milligan and Plankenhorn have been playing regularly and writing together since Jeff played all of the late Stephen Bruton’s guitar parts on the tribute album, An Evening with the Songs of Stephen Bruton. Milligan also sings backup on “Lose My Mind.”

Since emerging as the go-to-guitarist for both recordings and live touring by a host of Texas music stars, Jeff Plankenhorn has won accolades from both players and the media alike.

“What a great piece of work – congratulations! The songs are kick-ass, the recordings are in your face, and the production is immaculate! There is a soulfulness in each song that stirs a flame from the embers of love reclaimed. The stories are universal and in tune. The guitar riffs are wicked but true. This recording is relevant to the times and will be on people’s playlists for a long time.” – Joe Ely, upon hearing SoulSlide

“…with a voice like a bearded angel and some of the best guitar playing in the Western Hemisphere, he performs songs of depth and weight that belies his age.” – Jon Dee Graham, Texas songwriting legend.

“‘Plank’ is simply one of the best players in a city full of them. ‘Plank’ – if I go first, will you play at my funeral?” – Jody Denberg, Austin radio legend & current on-air talent at KUTX-FM.

Randy McAllister & The Scrappiest Band in the Motherland :: GRISTLE TO GOLD Blues For Peace Worldwide Events Coming May 27-30, 2016