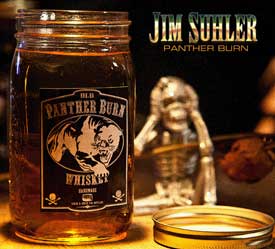 Dallas singer, songwriter and infinitely creative guitarist Jim Suhler has been making extraordinary, vital music since the eighties, backing a who’s who of blues royalty, including George Thorogood live and in the studio for six albums since 1999. Panther Burn is the fifth release with his band appropriately named Monkey Beat, and it grabs the heart and mind and does not let go.

Suhler corrals Carlton Powell and Buddy Momed (bass), Beau Chadwell, Kevin Schermerhorn and Jimmy Morgan (drums), Tim Alexander (piano, organ, accordion) and Shawn Phares (organ), Jason Elmore (guitar), Kim Wilson (harp) and Carolyn Wonderland and Ray Benson (vocals) for 13 original musical statements and a cover of “Remember Mama” from To Kill a Mockingbird. The title track is an ominous, tolling wall of guitars featuring a piercing solo with long, sustained lead lines supporting a macho blues boast. “I Declare” shuffles with that inimitable, hard charging Texas lump-de-lump embellished by the quaking harp of Kim Wilson as Suhler sings out while making his guitar sing along in assent with sumptuous tone that characterizes him and all great Texas guitarists. The heavy grooving “Across the Brazos” utilizes a funky, mesmerizing country blues riff for Suhler’s classic plaint and a swirling Leslie-driven solo.

“Leave My Blues Behind” ramps up the energy in an urgent, surging, jazzy minor key shuffle with Suhler airing out his always tasty chops while revealing “Darkness blocks my way, I can’t see where to go,” his smoking solo cutting a musical swath through the track. The churning half-time feel of “I See You” is made exotic with snaky, droning Middle Eastern melodies dynamically contrasted with stomping slide riffs under haunting, recurring images based on the horrific, unimaginable loss of Suhler’s daughter Brittany in a car accident, and containing the unforgettable line “I see you in my dreams, hear your voice, I hear your scream.” Barely two minutes long, his breathtaking, stunningly melodic slide playing on the dramatic, heart-rending “Remember Mama,” affords Suhler the opportunity to pay tribute to a classic film to which his personal connection produces moving results that cannot be manufactured.

Showing pride in his roots in two revered “blues” states on the autobiographical, nimble country hoedown of “Texassippi” as Suhler adds memorable slide guitar hooks, melancholy melodies and a delicate, wistful guitar coda. The pumping boogie of “Sky’s Full of Crows” highlights Suhler’s rich, nuanced tenor and his amazingly fast, fluid, melodic chicken-pickin’ around his confessional tale seeking redemption. The relentlessly charging blues-rock of “Between Midnight and Day” finds guest axeman Jason Elmore blistering his strings to the point of meltdown and joining Suhler in sensuous harmony lines while the singer swaggers on a fist-pumping anthem that could blow the roof off an arena.

Maintaining the heart-pounding adrenalin, Suhler’s ode to the heedless consumption of black gold in “Dinosaur Wine” contains exceptionally inventive lyrics. “Amen Corner” segueing into “All God’s Children Get the Blues Sometime” shows another strain of Texas music at which Suhler excels, his acoustic slide hearkening back to Blind Willie Johnson. The snappy 8-bar boogie of “Jump Up, Children” transports the lines as Suhler picks a hip modal solo. The rousing, muscular blues-rock of “Worldwide Hoodoo” churns like a boiling vat and closes the varied set with the spooky, swampy lyrics intensified by needle-sharp guitar fills and explosive, fret-warping solos.

Though eminently qualified to join the guitar hero sweepstakes any time it strikes his fancy, Jim Suhler has instead chosen to apply his enormous musical gifts and experience to produce an aural picture of the joys and sorrows of his life to date. The intimate look provided leaves an indelible impression as well as listening rewards to be returned to and enjoyed time after time.

Jim Suhler made a name for himself in the State of Texas as one of a number of fine young Texas guitar slingers coming out of the Dallas area. In ’99 Suhler stepped into the world spotlight as guitarist for George Thorogood in his band of superstars collectively known as The Destroyers. Since joining The Destroyers Jim has recorded, toured the world and written songs for the band. Such is his reputation, he has frequently been included in many of the “Top Ten Guitarists” lists featured in various music publications. His album Tijuana Bible, released in 2009 by Underworld Records, was recorded in Nashville with Tom Hambridge producing, and included guest artists Elvin Bishop, Jimmy Hall & Joe Bonamassa. The album was a Rock Blues Album nominee in the 2010 Blues Music Awards

When not touring the world with Thorogood, Suhler gets out on the road with his highly regarded Texan band Monkey Beat, adopting the same take-no-prisoners attitude that has prevailed in his playing with George Thorogood and the Destroyers. Along with Suhler on guitar and lead vocals, the band of top musicians includes bassist Carlton Powell, keyboardist Shawn Phares and drummer Jimmy Morgan.

Suhler’s original music has been used internationally in commercials, TV shows and also in numerous film trailers, such as “Spun,” “The Big Lebowski: Blu-Ray Edition,” “Wallace & Grommit: The Curse Of The Wererabbit,” plus documentaries “The Big Shootout” and PBS special “Larry Vs. Lockney.” His original songs have been recorded by George Thorogood, Bugs Henderson, The Tejas Brothers and Jason Elmore. He is a member of the Buddy Magazine “Texas Tornado” class of ’89, recognizing the top Texas guitarists, vocalists and keyboardists.