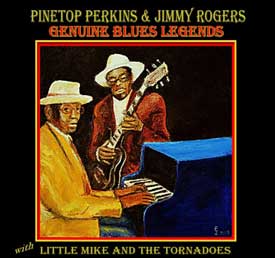 Jimmy Rogers and Pinetop Perkins had a special and magical sound onstage together—a sound that would have been lost in time if it were not for Little Mike. This remarkable album captures that moment and the wonderful Chicago blues sounds that the two blues legends were able to seamlessly weave together on stage.

This live recording comes to you raw and unscripted but with a remarkable clarity that belies its age and dated recording equipment. The first four cuts on the recording find Pinetop leading the band with lively and sharp piano playing characteristic of his earlier years in Chicago. Jimmy Rogers, taking the lead for the cuts five through seven showcases some of his greatest hits and some exceptional lead guitar throughout. In fact, even through Pinetop’s lead on the last couple of songs, Jimmy’s lead guitar is especially strong.

All in all this CD is a treasure; capturing two legendary bluesmen in their prime.

Both Jimmy Rogers and Pinetop Perkins are genuine blues legends. Both represent the true Mississippi roots of the Chicago blues and both enjoyed decades on stage. They were friends and fishing buddies whose careers, however, had often traveled distinctly separate roads. Jimmy helped to shape the original Chicago blues sound in the early 1950s, while Pinetop enjoyed his greatest popularity around the turn of the 21st century. However, from the mid 1980s to Jimmy’s passing in 1997 they spent quite a bit time of playing and touring together. This album, recorded live in 1988, captures the magic of that musical partnership.

Pinetop was born on the Honey Island plantation near Belzoni Mississippi in 1913. He began playing guitar and then piano as a young teen and by 1927 was playing professionally in juke joints and clubs around the delta. After a couple of year stint on the King Biscuit flower hour in Helena Arkansas starting in 1942, he began working his way north playing with Robert Nighthawk and Earl Hooker while also working as a mechanic around St Louis and Cairo Illinois. He didn’t reach Chicago until around 1960

Born in 1924 near Ruleville Mississippi, Jimmy Rogers began playing harmonica as a young teen and by 1947 he and his friend Snooky Pryor had moved to Chicago where Jimmy switched over to guitar as a member of the early Muddy Waters band. Throughout the 1950s Jimmy recorded frequently and had a number of hits with Chess Records. However by the late 1950s Jimmy began to drop out of the music world eventually opening up a clothing store which got torched in the 1968 Martin Luther King riots in Chicago.

As Jimmy began to slowly reenter the music world in Chicago in the early 1970s, Pinetop was busy as a member of the Muddy Water’s band and later after 1980 as part of the Legendary Blues Band. It wasn’t until the mid 1980s, as their career paths finally intersected, that the two began to get together to play and tour regularly.

Although Little Mike met Pinetop in the 1970s while he was with Muddy, it was after Pinetop left the Legendary Blues Band that he began to play regularly with Little Mike and the Tornados. This resulted in Pinetop’s first US solo album, After Hours, released in 1988 under the Blind Pig Label. Mike recounts, how the stage was set for this performance during that summer:

“I was booking Pinetop on some east coast tours and he gave my number to Jimmy, and I did the same for Jimmy. Eventually things evolved into tours with Pine and Jimmy ….. I had backed up Bo Diddley at the Grand Auditorium in Ellsworth Maine the year before so it was only natural that I call them the following summer when I had a tour with Jimmy and Pine.”