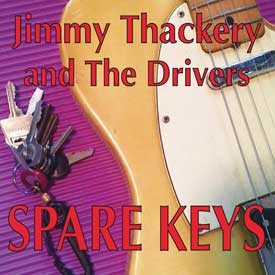 Jimmy Thackery has made his career as a musician for over 40 years, traveling the globe from big festivals to everyone’s favorite neighborhood bars. A true professional musician, Jimmy gives his audience his best each and every performance, respecting and appreciating his fans along the way. His music reaches people’s lives in personal and profound ways, as witnessed by the touching messages he receives during and after each tour.

Spare Keys is an all-original album, with six instrumentals and six tunes with vocals. These songs use all the keys available on guitar, running the gamut from soulful blues in “Blues All Night,” to heart-wrenching blues in “I Even Lost the Blues” and “You Can’t Come Back.” His rock roots shine in “Puttin’ the Word Out” and “Fightin’ in the Jungle,” which also features howler monkeys recorded at the Xunantunich Mayan Ruins in Belize.

The instrumentals highlight Thackery’s vast styles, influenced by his interest in all varieties of music from classical to slack-key to country to rock and tropical rock. “Candy Apple Red” is an upbeat melody repeated from the Strat to baritone guitar, and slowing down a bit, “Same Page On Demand” will wow you with some powerful, minor chords. For one that melts your worries away, descend into the dreamy “Bella Noche,” guaranteed to soothe your soul on a continuous basis.

“The Barber’s Guitar” has an interesting story, for those of you who like to know where some inspiration for writing is found. Jimmy saw an old guitar propped in a corner of his regular barber shop, and asked the barber if he would like him to fix it up for him. Of course, the answer was an enthusiastic ‘yes,’ so it was gifted with fresh strings, a new homemade nut, a straightened neck and tuned. When the time came for a Thackery test run, an unfamiliar song spontaneously took over his hands, and “The Barber’s Guitar” was born. Jimmy believes every instrument has a song inside, waiting to shine, and somehow this one was a thankful return for being cared for and pampered!

The Drivers on this CD are Rick Knapp on bass and Chris Reddan and George Sheppard splitting the drum tracks. Chris came along on tour when George had emergency shoulder surgery in 2015, so he sat in the drum chair for the first recording session, and George finished out upon his return. The recording, mixing and mastering took place at Tony’s Treasures in Cadiz, OH.

If you don’t have a set of spare keys hidden away somewhere, this is your important safety tip reminder. The album is available on disc or by download at CD Baby, iTunes, Amazon or at jimmythackery.com .