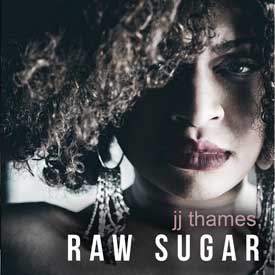 Raw Sugar, JJ Thames’ follow-up to her debut album is a collection of 13 original works in collaboration with Eddie Cotton, produced by Eddie Cotton (also lead guitar on the album) and co-produced by Thames, and recorded at Malaco Recording Studios. Thames continues her reign as one sexy chanteuse. She has performed all over the world with artists as a backing vocalist, and has even penned songs for some main stream pop, R&B, rock and hip-hop artists, but her path to success was not always glamorous or easy.

Raised in a General Motors fueled, blue-collar family, the classically and jazz trained JJ began performing at the tender age of 9 years old, and became a blues- shouting banshee by the time she was just 18 years old. She cut her teeth after moving down to Jackson, MS, where she performed with the celebrated “Chitlin’ Circuit” superstars such as Marvin Sease. Thames has proven to be a true survivor as she scrambled her way to the top of the roots music heap, creating a soon to be world-renowned reputation.

A colorful mixture of traditional blues and soul, Thames began her career in the late 90’s onstage with musicians and friends, Bobby Blue Bland, Peggy Scott Adams, Willie Clayton and Denise LaSalle to name just a few. She diversified her influence when she began to sing background vocals for reggae-rock band Outlaw Nation, and becoming immersed in another form of roots music, Reggae and Ska. JJ began touring with many reggae and rock legends including Fishbone, The (English) Beat, Israel Vibrations, Bad Brains, and cult favorites Slightly Stoopid and 311. Her fans are a mixture of true genre bending, traditional blues fans, southern soul blues lovers, and ska rockers. Rockabilly and swing dancers, grey-haired hippies, and everyday folk of all ages flock to see JJ and hear her musical messages of love, pain, hope, freedom, and empowerment.

Thames’ live shows are the stuff of legend. She honors the bold blues women of the past with both feet firmly planted in the now. With her heart on her sleeve, she belts, growls, shouts, croons and moans from a place deep within her soul that harkens back to the days of Chess, Bluebird and Stax Records. She uses music as therapy and often writes from her own life story, and chooses material with positive affirmations that leave the audience feeling healed and exhilarated.

A show that is part revival meeting and sexual celebration, Thames will deliver a Mississippi juke joint-tongue-in-cheek blues tune or a soul ballad like Etta James’ “I’d Rather Go Blind,” or “I Just Wanna Make Love To You,” or Ruth Brown’s “Mama, He Treats Your Daughter Mean,” encouraging audiences to leave behind their dancing reservations. She’ll slay the crowd with her balls-out rendition of “Wang Dang Doodle” or testify with a sweat-drenched passionate rendition of Big Mama Thornton’s “Ball And Chain,” Ray Charles’ “I Believe To My Soul,” or B.B. King’s “I Know You Love Me Baby” like no other. She often says she is a “woman of the 1950’s/60’s trapped in a young woman’s body” and she dresses the part. Bedecked in dresses, frocks and accessories from that era, Thames’ performance is Mississippi by way of Memphis with a quick stopover in Detroit.

The Detroit Free Press said it best, “She’s young and beautiful to look at, she’s a wonderful storyteller and her vocals are consistently breathtaking. Her shows are electrifying, and crowd-pleasing. This doe-eyed Motown (Detroit, Michigan) native has the “it” factor. Look out world.”

Her debut album, Tell You What I Know (2014 DeChamp Records), received much acclaim and stayed in the top 10 on Billboard’s Hot Singles Sales Chart for 21 weeks – 2 of those at #1. The album also made it as high as #3 on the Billboard’s Blues Chart.