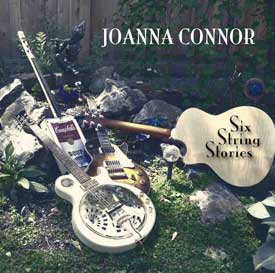 M.C. Records is thrilled to welcome back The Queen of Blues/Rock guitar Joanna Connor to the label. Six String Stories was released internationally on August 26, her first in 14 years. Joanna will be touring nationally and internationally to support her new recording.

Six String Stories is the one that the fans who pack her hometown gigs have been waiting for. You’ll still hear the scorching solos – but there’s more to Joanna Connor than that. The disc’s ten tracks include tastes of gospel, rock, soul and funk; all with the gutsy singing and heartfelt playing that have always been her trademarks. Connor wrote eight tracks on Six String Stories with Marion Lance Lewis, a mainstay of her live band.

“Joanna Connor might be the best – or most original – blues-based slide guitar player you’re likely to come across today. Or tomorrow.” — Guitar World

No doubt you’ve seen it by now: That viral video of a woman onstage in a bright purple dress, playing one absolute scorcher of a slide guitar solo. That’s Joanna Connor in her home turf of Chicago, with the firepower she delivers to local crowds on a nightly basis.

That video has gone around the world a few times, getting millions of views and being re-posted in Japan, Russia and all over Europe. “It was just a phenomenal thing that happened. I was getting calls from America’s Got Talent and movie people reaching out. I think people loved the combination: Here’s a woman who looks like somebody’s mom, and she’s playing like this. What I remember most was that it was 90 degrees that day, so I was wearing the coolest dress I had.”

The viral phenomenon ironically happened while Connor herself has been off the road, being a mom and playing club residencies, to the tune of 200 local gigs a year. But a studio return was long overdue and “Six String Stories,” her first album in a dozen years. The disc’s ten tracks – all but two written by her with band-mate Marion Lance Lewis – include tastes of gospel, rock, soul and funk; all with the gutsy singing and heartfelt playing that have always been her trademarks.

Connor admits that it took some coaxing to get her back into the studio. “I’ve always been a live musician and going into the studio used to be a daunting, scary thing. But you know what, the older I get the more comfortable I am with myself. I don’t listen to the outside voices in my head, I just go with it.”

“Joanna Connor is a popular Chicago blues musician with the ability to pull off an absolutely face-melting guitar solo.” — The Daily Mirror

That sense of self-determination extends to tracks like the empowering “It’s a Woman’s Way” which gives her daughter a little romantic advice. “She broke up with her first boyfriend before the prom, so I wrote that for her.” Then there’s the album’s other cover, Jill Scott’s “Golden,” which Connor makes her own with a forceful spoken part. “It’s about a woman taking control of her life, and praising the creator for giving it to her. I think the gift of approaching middle age is that you know who you are and become confident in yourself. For me that’s been a real journey, and a lot of it is about your own attitude.”

At the other extreme are guitar-slinging tracks like “Halsted Street” (“I went for a Metallica kind of sound on those power chords,” she says) and the Bayou-inspired “Swamp Swim.” Then there’s “Heaven,” which takes everything back to church. “I wrote that as more of a political song with a West African feel, but Lance gave it more of a gospel sound. His brothers are pastors and have churches, so they brought that kind of feel into it.”

With the album finished and her daughter at school, Connor is planning to hit the road, giving all the online fans an overdue chance to see her in real life.