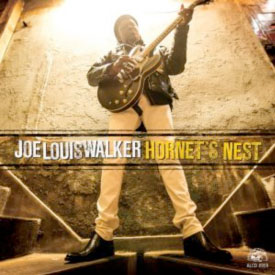 According to Walker, the album, with Tom Hambridge at the helm, was a joy to make. The band—Hambridge on drums, Reese Wynans on B-3 organ and piano, Rob McNelley on guitar, and Tommy MacDonald on bass—pushed Walker to deliver his absolute best performances. “It comes through loud and clear,” Walker says. “If I don’t believe it, nobody is gonna believe it. And ain’t nobody is gonna listen to it or buy it. Tom made everything exciting.”

The wisdom and soul of the blues welded to the attack of rock, with Walker’s powerhouse voice and stinging guitar work setting the tone. Nine new originals, plus cool new versions of The Rolling Stones’ “Ride On, Baby” and Roy Hamilton’s “Don’t Let Go.” From raucous rockers like the title track and “Ramblin’ Soul” to the deep down blues of “Stick A Fork In Me” and “I’m Gonna Walk Outside,” Joe Louis Walker creates vital, modern-day roots music like no other. “Powerful, soul-stirring, fierce and gritty. A legendary boundary-pushing icon of modern blues” – NPR

Home on the Highway (Part VI) The Bluesmasters :: VOLUME THREE