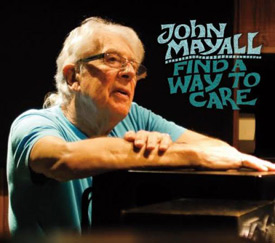 Produced by John Mayall (who also did the graphic design and artwork for the album) and Forty Below’s Eric Corne, Find a Way to Care was recorded at the House of Blues Studio in Encino, California. In addition to Mayall (vocals, piano, Hammond organ, Wurlitzer, clavinet, guitar and harmonica), featured on the sessions are Rocky Athas (lead and rhythm guitar), Greg Rzab (bass) and Jay Davenport (drums), who collectively are now into their seventh year as John’s band. The group is also augmented by a horn section on several tracks.

About the new album, Eric Corne says, “I really wanted to feature John’s keyboard playing on this record. He’s truly one of the most lyrical, economical and underrated keyboardists around. We also wanted to change things up a bit after the success of A Special Life and the addition of a horn section on several tracks was a really fun way to do that. As good as the last album was, I think this one is even better.”

The even-dozen tracks on Find a Way to Care include a scintillating group of new songs and savvy covers of “Mother in Law Blues” (Don Robey),  “The River’s Invitation” (Percy Mayfield), “I Feel So Bad”(Lightnin’ Hopkins), “Long Distance Call” (Muddy Waters), “I Want All My Money Back” (Lee Baker) and Drifting Blues” (Charles Brown).

About his choice of cover songs on the new album, Mayall says, “Every time I make an album, I always feel I owe it to my fans to come up with fresh and varied interpretations of the blues. With this in mind, I chose an assemblage of songs that includes perhaps some slightly lesser-known bluesmen, and that all had either different beats or special instrumental treatments. I also found three songs that would be further enhanced by the addition of horns.”

Added to the mix are original songs that always feature Mayall’s take on the current human condition, as well as universal truths. “As always, I draw from my own experiences and thoughts about things in my life so that from album to album I create on ongoing musical diary of my life,” he explains. “The blues never lets me down!”

Find a Way to Care comes following an especially exciting year-long period of great music from Mayall that included the 2014 release of his first studio album in five years, A Special Life, and the April, 2015, release of John Mayall’s Bluesbreakers – Live in 1967 (Never Before Heard Live Performances). The live album was a critically-lauded archival recording of one of the best of his Bluesbreakers band lineups that featured Mayall, as well as Peter Green (lead guitar), John McVie (bass) and Mick Fleetwood (drums). It showcased a band that was together for only a scant three months, yet created a lasting legacy, made an immense impact on music and led to the formation of one of the most acclaimed groups of all-time when Green, McVie and Fleetwood left to form Fleetwood Mac.

For over 50 years, John Mayall has served as a pioneer of blues music, rightly earning him the title, “The Godfather of British Blues.” In 2013, John signed with producer Eric Corne’s label, Forty Below Records, and has since been experiencing a true artistic and career renaissance.

Forty Below Records will also release a special vinyl LP version of the new album in the fall.

To watch the video trailer premiere of the making of the Find a Way to Care album, click here.