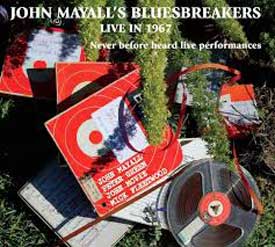 John Mayall’s Bluesbreakers – Live in 1967 (Never Before Heard Live Performances) on Forty Below Records is a very special archival recording of one the best of the Bluesbreakers band lineups, featuring legendary musicians John Mayall (vocals, keyboards, harmonica), Peter Green (lead guitar), John McVie (bass) and Mick Fleetwood (drums). Distributed by Sony/RED, John Mayall’s Bluesbreakers – Live in 1967 showcases a band that was together for only a scant three months, yet created a lasting legacy, made an immense impact on music and led to the formation of one of the most acclaimed groups of all-time when Green, McVie and Fleetwood left to form Fleetwood Mac.

The genesis of Live in 1967 came about because a staunch fan from Holland, Tom Huissen, was able to sneak a one channel reel-to-reel tape recorder into five London clubs (including the famed Marquee) in early 1967 and capture this exciting glimpse into music history. For nearly 50 years these tapes remained unheard until John Mayall acquired them recently and began restoring them with the technical assistance of Eric Corne of Forty Below Records. “While the source recording was very rough and the final result is certainly not hi-fidelity, it does succeed in allowing us to hear how spectacular these performances are,” says Corne.

“I’d known for a decade or two of the existence of these tapes and in fact Tom Huissen had sent me a CD with 50 second teasers for some of the tracks that he’d secretly recorded at our London shows,” recalls Mayall. “Last year, Tom decided he wanted the world to hear these performances and work soon began on restoring the already fine quality on the old reel-to-reel tapes.”

John Mayall has some fond memories about how this band came about. “Through most of 1966, Peter and John were both regular members of the Bluesbreakers and Aynsley Dunbar was the drummer,” states Mayall. “However, even though Aynsley was a great drummer, it was starting to become apparent that his jazz influenced style of playing was veering away from the blues. As I recall, Peter had been close friends with Mick Fleetwood for some time and he suggested I give him a shot. And so for a short period of only about three months Mick became a Bluesbreaker.”

The band’s repertoire on the tracks of Live in 1967 includes some songs that were originally recorded on The Bluesbreakers first two albums, John Mayall’s Bluesbreakers featuring Eric Clapton and A Hard Road (which featured Peter Green), plus the soon-to-be recorded Crusade album, which featured young guitarist Mick Taylor after Peter Green left the band. Other songs on the new CD make their live debuts after having been recorded originally as singles in the UK and would later appear on Mayall’s Looking Back album. In addition, several of the songs on Live in 1967 make their first appearance in any form on a Bluesbreakers album.

Two long-time mainstay influences on John Mayall’s storied career – Freddy King and Otis Rush – are well represented here with live versions of songs long-associated with the two blues giants. “All Your Love,” “Double Trouble,” “So Many Roads” and “I Can’t Quit You Baby” come from the Otis Rush canon of blues classics; and Freddy King’s “The Stumble,” “San-Ho-Zay” and “Someday After Awhile,” are given resounding treatments here by the quartet playing with a sense of energy and urgency.

“Ever since Eric Clapton joined the band, we both had a great interest in the recorded work of Otis Rush and Freddy King and many of their classic songs became part of our live performing catalogue,” Mayall says about the two blues icons. “Their guitar work was always an inspiration for Eric, Peter Green and Mick Taylor in those early years.”

The music on John Mayall’s Bluesbreakers – Live in 1967 showcases a band that although only together for a short time, was incredibly tight and in-the-pocket while still allowing room for improvisation, none more so than Peter Green, whose guitar work on this CD will stand as some of his best-ever on record. All of Green’s guitar trademarks – the stop time signatures, his incredible sustain and a hair-raising powerful tone – are presented here in all their glory, highlighting a musician who was more than able to assume the mantle as the guitar player following in Eric Clapton’s well-trod footsteps as a member of one of blues music’s all-time aggregations, John Mayall’s Bluesbreakers.

Johnny Winter: Down and Dirty Documentary The Mike Henderson Band :: IF YOU THINK IT'S HOT HERE