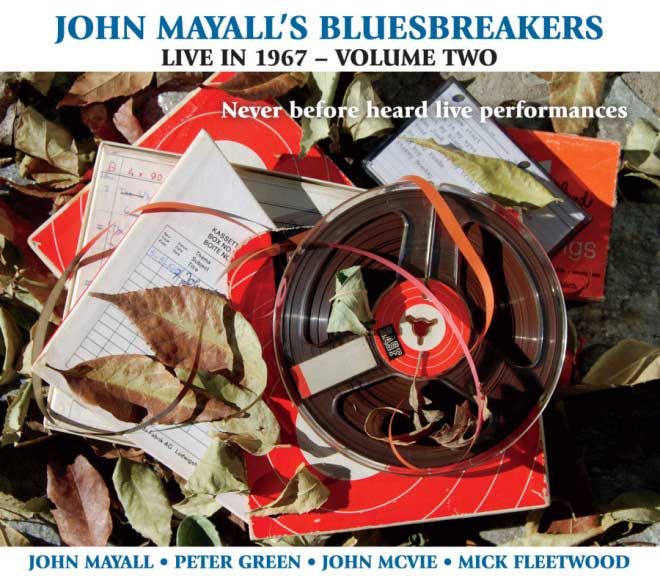 John Mayall’s Bluesbreakers– Live in 1967- Volume Two, continues the archival blues path blazed in Volume One that captures previously unavailable live recordings of heralded performances of one of the best of the Bluesbreakers band lineups featuring iconic musicians John Mayall (vocals, keyboards, harmonica), Peter Green (lead guitar), John McVie (bass) and Mick Fleetwood (drums). Distributed by Sony/RED, John Mayall’s Bluesbreakers – Live in 1967 – Volume Two showcases a legendary group of players who while only together a short three months, created a lasting legacy, made an immense impact on music and led to the formation of one of the most acclaimed groups of all-time when Green, McVie and Fleetwood left to form Fleetwood Mac.

Produced by John Mayall (who also did the cover package photography, artwork and design) and Forty Below’s Eric Corne from one channel reel-to-reel original tapes recorded by Tom Huissen, John Mayall’s Bluesbreakers– Live in 1967- Volume Two contains performances recorded in the Spring of 1967 at such well-known London venues as Bromley, The Marquee Club, The Ram Jam Club and Klook’s Kleek.

“I am so happy that the remaining usable tracks from these London club dates have been released as a follow-up to the well-received Volume One,” says John Mayall about the new album. “Peter Green as before is on fire throughout and this set includes a great instrumental based on his composition, ‘Greeny.’ There are a couple of Otis Rush tracks that were included on the first volume, but they are from different venues and totally different.  I couldn’t possibly let these slide. Also, there is another version of T-Bone Walker’s ‘Stormy Monday’ that is sung by Ronnie Jones, who would frequently sit in at our gigs. John McVie gets in a great bass solo on ‘Chicago Line’ and Mick Fleetwood drives the whole set with his unique and powerful drumming. With these new tracks added to the collection, it pretty much features all the material we had in our repertoire at that time and I’m very glad that you can now enjoy this great piece of rock/blues history.”

Volume Two showcases three John Mayall originals including the opening track, all-time blues classic “Tears in My Eyes;” “Chicago Line;” and “Please Don’t Tell,” a great example of the power blues sound The Bluesbreakers were revered for around the world. These historical performances were captured for all time and largely unheard for almost fifty years until John Mayall recently obtained the tapes and began restoring them with the technical assistance of Eric Corne. Speaking about the tapes, Corne says, “While the source recording was very rough and the final result is certainly not hi-fidelity, it does succeed in allowing us to hear how spectacular these performances are.”

The Bluesbreakers live sets at the time of these performances included songs that had originally appeared on the first two band studio recordings with Eric Clapton and Peter Green, respectively, holding down the guitar chair in the group, as well as some that would soon be recorded for the third LP, Crusade, by which time Green, McVie and Fleetwood had left to start Fleetwood Mac and the new guitar player was a young, then-unknown Mick Taylor, who would later go on to further fame and glory as a member of The Rolling Stones.

Of the new album’s 13 tracks, three are songs that first appeared on Volume One, although these new tracks included here were recorded on different nights and ably demonstrate how improvisational the band could be infusing a different feel and tone from night-to-night. Of particular interest is the inclusion of the version of “Stormy Monday,” which features special guest vocalist Ronnie Jones, a former American serviceman and original member of  the first incarnation of Blues Incorporated, a contemporary band to the Bluesbreakers, which included Alexis Korner, Cyril Davies, Jack Bruce and Ginger Baker during its lifetime. Another highlight is the Peter Green instrumental, “Greeny,” which perfectly states the case for why he is still revered as one of the best-ever guitarists.