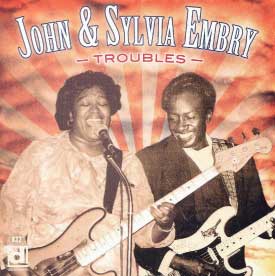 Delmark Records is ecstatic to present for the first time ever on CD, a very rare Chicago Blues LP from Queen Sylvia & John Embry. The album After Work from 1980 has become a collector’s item for hardcore, real-deal Chicago blues fans all over the world. Now titled Troubles, this exciting recording, captured live and in the studio, is now available digitally with the addition of five previously unissued tracks.

Queen Sylvia Embry is best known as the bass-playing vocalist in Lefty Dizz and the Shock Treatment during the late 70s. The group was immensely popular and played some of the best (and wildest) blues music in Chicago.  They were the house band for Blue Mondays at the Checkerboard and played regularly at the Kingston Mines. It seemed as if Sylvia was poised to break out as Chicago’s leading blues woman as she started to front her own band and recording for three different labels in just a few years. “John Embry was one of the city’s fine but unheralded blues guitarists”, said Sylvia. They were married for a time but by time they recorded this album they had divorced. Recorded on January 19, 1979 by the tiny Razor label the original album, known as After Work, is long out-of-print. This new CD re-issue Troubles, contains previously unissued material. This is classic Chicago blues at its best.