Johnny Rawls :: TIGER IN A CAGE 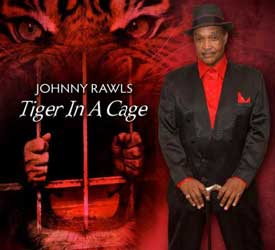 Johnny Rawls is releasing Tiger In A Cage February 19th. Produced by multi-Grammy winning producer Jim Gaines, Tiger In A Cage, features backing by his studio group, The Rays, along with background vocals by the Iveys. Eden Brent performs a duet with Johnny on “Southern Honey,” a Zydeco tune.

Johnny is once again nominated for Male Soul Artist of the Year for the upcoming Blues Music Awards and his last album, Soul Brothers, with Blues Hall of Fame member Otis Clay, was nominated for every major blues award.

The twelve tracks on Tiger In A Cage include nine original songs, plus Johnny’s takes on Sam Cooke’s “Having A Party,” Jackie Wilson’s “Your Love Is Lifting Me (Higher and Higher)” and the Stones’ “Beast of Burden.” Rawls also does a funky reworking of “Red Cadillac” with the Rays, a song that is a fan favorite at his live shows. While known for his irresistible old school party tunes, which are well-represented on the CD, the title track is a serious song about a 19 year old black man being sent to prison; a life thrown away, being over before it is started. Note: there are three times as many people in U.S. prisons now than before the failed War On Drugs was begun.

Soul Brothers, released in 2014, was one of the two highest rated blues albums on Downbeat Magazine’s 2015 Best of the Year list of albums reviewed last year. Otis Clay also appeared on Remembering O.V., the tribute to Johnny’s friend and mentor, O.V. Wright.

Raised in Purvis, MS, Johnny Rawls was already backing stars like Z.Z Hill, Little Johnny Taylor, Joe Tex and the Sweet Inspirations while still in high school. In his early 20’s he was hired by O.V. Wright as his band director and held that role until O.V.’s death in 1979. He kept the band together, opening for and backing Little Johnny Taylor and others until 1985 when started his solo career. Johnny Rawls still tours constantly, performing 150 shows a year in the U.S. and overseas.