Johnny Winter: Down and Dirty Documentary 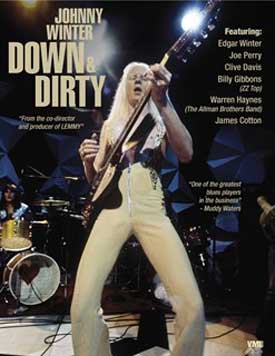 “The upcoming acclaimed Johnny Winter documentary, Down and Dirty, will be released internationally soon,” says Paul Nelson, who is also the executive producer for the film. The feature length documentary focuses on the life and career of blues legend Johnny Winter. Directed by Greg Oliver, the cast includes Winter and his band, plus James Cotton, Edgar Winter, Billy Gibbons, Warren Haynes, Susan Tedeschi, Derek Trucks, and more along with plenty of archival footage.

“Johnny Winter: Down and Dirty serves as an excellent reminder of this guitarist’s greatness,” says San Jose Mercury News writer Jim Harrington. “The insightful documentary, which had its world premiere at the South by Southwest Film Festival in Austin, Texas, recounts the 70-year-old Texan’s career with a superb mix of archival clips and new footage.

Winter is incredibly candid and open in the interviews filmed specifically for this documentary, talking at length about his problems with drug addictions and the many ups and downs of his career. He’s also very funny, clowning around with bandmates and killing time between tour stops.

The film feels remarkably intimate, as if we’re sitting in a backstage dressing room or on the bus with Winter after a gig.”

Here’s a link to the trailer.