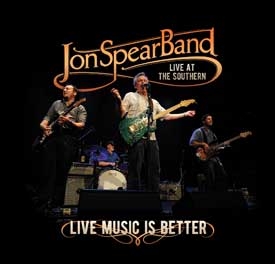 Live Music Is Better was recorded by the Jon Spear Band before a live audience at the Southern Café & Music Hall in Charlottesville, VA on November 27, 2015. On that night, the band not only reprised some of their award-winning original songs from their debut album Old Soul, but also covered several red-hot blues songs in the imaginative style that has made them a favorite among a growing list of blues lovers.

The release of this second recording caps off a year of increasing success for the band, which saw them receive extensive airplay, numerous favorable reviews, and opportunities to appear with several major artists, while Old Soul captured the #24 spot on the Roots Music Report’s Top Contemporary Blues Albums for 2015.

The personnel on the new album includes special guests Haywood Giles on saxophone, and Adrian Duke on keyboard, along with the band’s core members: Dara James (vocals, guitar and harmonica), Andy Burdetsky (bass and backing vocals), John Stubblefield (drums) and Jon Spear (guitar and vocals). Adrian Duke, a semi-finalist at the 2016 International Blues Challenge, also lends his unique vocal talents to a rollicking New Orleans-style version of “I Love My Skin,” one of the award-winning originals from the band’s first CD.

The title song of the album, “Live Music is Better,” is the band’s homage to all those who make live music possible including club owners and concert venues, hardworking musicians, stage and sound crews, local blues and other music societies and, most important, the fans who come out and support their favorite performers. As the song says: “Pay a DJ if you will, it don’t give the same thrill – Live Music is Better!”