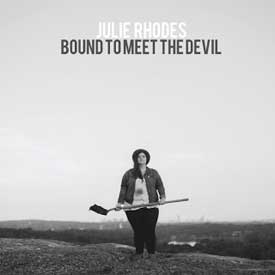 Bound To Meet the Devil (February 26, 2016) marks the arrival of a powerhouse, new vocalist on the blues scene: Julie Rhodes. Just two years ago, she hadn’t yet graced the stage, though she was an ardent fan and working at an ice cream parlor. Yep Roc Records artist Jonah Tolchin heard her singing along to one of his songs in the audience; after the show, they talked and Tolchin was shocked to learn that Julie wasn’t (yet) an artist with the vocal talents that she possessed. Less than a year later, Tochin was co-producing and playing guitar on Bound To Meet the Devil.

Already, she’s earned a northeast fanbase, has performed at venues like NYC’s Baby’s All Right, and has played CMJ. Counting Crows’ Adam Duritz said, “Get ready to be amazed by Julie Rhodes.”

The resulting album has an immediate, visceral impact from first listen onwards, bearing the influences of singers like Irma Thomas, Shovels & Rope, Etta James, and Bonnie Raitt from the longing of album opener, “In Your Garden,” to her knowing vocals over the Muscle Shoals groove of “Collector Man.” The band provides ample support behind her, from the relaxed behind-the-beat “Hey Stranger” to the pure soul of “Hurricane.” Though the writing is uniformly strong, one of the album’s highlights is a spine-tingling cover of Son House’s “Grinnin’ In Your Face.”